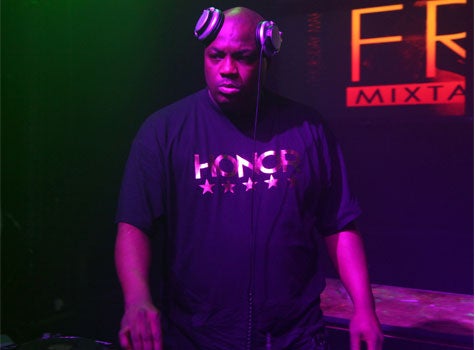 My plane had just landed at La Guardia (I had just gotten my signal back) when I heard Mr. Cee, a HOT 97 DJ and hip hop veteran (for those of you outside the tri-state area), allegedly got caught by NYPD getting dome from a male prostitute last Wednesday.

In turn, the story goes viral Sunday night and the message boards of every Black site reporting the story go nuts with homophobic rants on Monday.

Whether Cee is gay or not is his business, I don’t particularly care. And whether he got Lewinsky-ed by a hooker also isn’t my concern. It’s not like he was viewed as some pillar of morality and a bona fide role model who was damning one thing and doing another(Spitzer).

(In all the stories about Mr. Cee right now, not one mentions his marital status, a girlfriend past or present, whether he has children, or that he’s ever discussed homosexuality, much less made slurs.)

If he was engaged in a sexual business transaction, which isn’t legal, that’s up to a court to decide what to do with. Again, I don’t care since they are two grown and consenting adults.

What I am concerned about is the rampant homophobia in our community that’s rearing its ugly head again and again and again. On every comment section I visited, there was rant after rant after rant with words too ugly to quote about gay men, especially Black ones, and folks talking about “pouring out a lil’ liquor for Mr. Cee’s career.” Mixed in with the same commenters dropping F-bombs (the six-letter one, not the four) were others raging on and on and on about “down low” men. And this is what I don’t get.

I have no respect for the stereotypical down-low man — the one that has a wife or girlfriend and maybe a family, who lies and deceives people he is dating or in a relationship with — about a fundamental aspect of who he is and who he likes (or also likes) to participate in sexual activities with.

I want every man who likes or also likes men to just come on out and be honest with the women he involves himself with and reveal who he is and the sex with men he enjoys. But that will never happen. And a large part of the reason it won’t is because of a culture that demonizes gay Black men, or at the very least allows it to occur and doesn’t say anything — along with a passive-aggressive tolerance of the insults.

We as a people can’t bash gay men, or implicitly tolerate homophobia, and in turn expect gay men to come “out of the closet” and be honest to the world (like every hetero is telling everyone they know) about who they love and who they do. Seemingly unbeknownst to so many of us, our raging homophobia is contributing to the very thing — lies, secrets, deceit — that we abhor. Look at the options we’re offering: come clean and be disgraced or stay hidden, live a lie, maintain it as long as possible… and be disgraced when it eventually comes to light.

If the end result is the same, why take the quick route to your damnation? I clearly don’t agree with hiding who you are when it affects other people in your personal life, but I do understand.

Like what is the desired end result of homophobia? Do you want men just not to be gay? It’s not going to happen no matter how much fuss people make or how many insults they hurl, so save the energy. Perhaps consider prayer, if that’s the desired outcome. Start with trying to pray away your own heterosexuality in exchange for temporary asexuality and see how effective that is, then report back. And let me ask this to the people who want homosexuality to stop: if you’re not gay, why do you even care so much to muster the energy to condemn? How does who an openly gay man loves or what he gets going in his bedroom (or car) affect how you live your life?

It doesn’t. And since you can’t do anything to make gay go away, stop with all the bashing. And the next time you silent condoners (those who don’t demean and degrade, but sit quietly by while it’s done) hear and see it being done, say something. If you’re not a part of the solution, you’re a part of the problem.

*steps off soapbox, curtsies, and sashays off.*