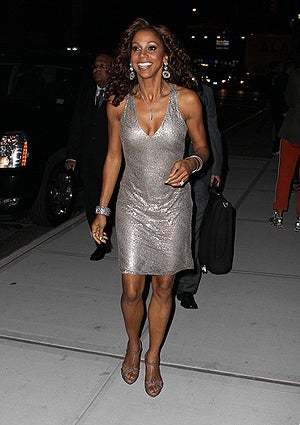 It all came down to Holly Robinson Peete and Bret Michaels on “Celebrity Apprentice” last night. In the end, Michaels trumped Peete. Still, she showed us the “tenacity” that she was talking about. We were in your corner, Holly. [EW] A new film on PBS “A Place Out of Time: The Bordentown School” documents the establishment of an all-Black school in Bordentown, New Jersey that was open from 1886 to 1955 and gives a thorough history lesson on post Civil War America. [NYTimes] In Egypt, archaeologists uncovered 57 ancient tombs with mummies inside. [UKPA] FOX picked up the hit show “Glee” for a third season. Go “Glee!” [EW] Rihanna wants to be a mom one day, but she’s not too keen on childbirth. The 21-year-old pop star said, “Even if I have to adopt, I want to be a mom.” [NYDN] Despite the heavy corporate branding of the World Cup, South Africa is making a strong effort to put its stamp on the 2010 World Cup. [NYTimes] The green ogre and his donkey have done it again. “Shrek Forever After” led box office numbers this weekend, pulling in $71.3 million. Still the film didn’t reach the $100 million that the industry predicted. [WashPo] Liza Minnelli’s remake of Beyonce’s “Single Ladies” has surfaced. We’re kind of speechless. What are your thoughts?