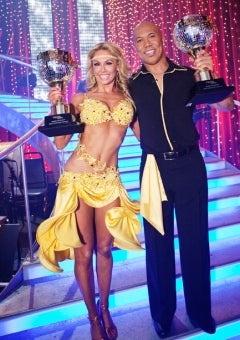 His moves on the football field were put to good use on the dance floor this season. Pittsburgh Steelers wide receiver Hines Ward and dance partner Kym Johnson took home the top prize last night on the season finale of “Dancing with the Stars.”

The winning couple’s last dance was a high-energy samba routine, after which Ward ran over to give his mother a kiss on the cheek… (Awwww!)

In addition to his family’s support, Hines credits Kym for keeping him on his toes — literally — throughout the season.

The  former Super Bowl MVP joins the ranks of five other pro athletes who make up the largest share of winners on “DWTS.” He plans to use his dance skills on the field. “I’ll be doing a tribute… every time I score a touchdown. You will see a “DWTS” routine somewhere in the end zone,” he said.