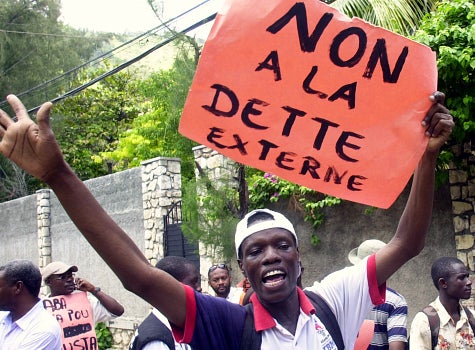 The sign reads in French: “No to Outside Debt”
In the wake of the devastating earthquake that hit Haiti, individuals, non-profits and countries all over the world have donated and are still raising millions of dollars for emergency relief in the country. The pace in which donations are pouring in for Haiti is unprecedented. Now, how fast it’s getting to those in need, that’s another discussion. So far U.S. non-profits have raised over $528 million dollars. Through their text message fundraising mission, the Red Cross has raised $185 million since the earthquake hit Haiti. The Business Civic Leadership Center, a nonprofit group affiliated with the U.S. Chamber of Commerce, announced on Tuesday that 299 companies had contributed more than $122-million to the relief effort. The Obama administration stepped up and pledged $100 million in relief funds. Last week’s star-studded telethon managed to raise, as of this past Wednesday, has raised $66 million to share between seven relief organizations. This rally cry to help Haiti, a country often ignored by the international community, is a hopeful start to years, even decades, of relief and rebuilding. It’s been estimated that it will take about ten years to rebuild Haiti. Countries like France and the U.S. are vocal about their dedication to assisting Haiti for the long haul. While that is encouraging to hear, it’s obvious nobody wants to have a conversation about Haiti’s crippling economy pre-earthquake. Sure, constant references have been made in the media about Haiti being the poorest country in the western hemisphere, but how did it get to be that way? Haiti has been drowning in a tsunami of debt for decades. No matter how much relief funds are raised, Haiti will continue to suffer under the unfair heavy burdens placed on it by the same government agencies and countries that are lending a helping hand during this time of emergency relief. Haiti’s debt troubles began to take shape following the independence of the country from the French back in 1804. In 1825 the Haitian people were forced to pay reparations to the French slave owners to secure the freedom they fought and lost their lives for. The only way a newly freed Black Republic could ever pay any of this money back was by borrowing millions from the U.S., Germany and France. The vicious cycle of debt in Haiti had taken a hold on the country and not surprisingly it proved to have long-term negative effect on the country. How can Haiti invest in its people when it is bound by decades of debt? Haiti was able to pay 60 percent of its debt to France after a long 122 years. Former Haitian President Aristide, before being ousted from Haiti by the U.S., called on to France to repay the over $21 Billion dollars they had paid the country. It was a bold move and a short time after, President Aristide was kicked out of Haiti. The IMF, whom Haiti owes $165 million in debt, jumped on the giving bandwagon and announced it would loan an additional $100 million to Haiti towards relief. Just what Haiti needs right now, more debt. To add insult to injury the IMF loan, in true form, comes with devastating conditions that include keeping inflation low, raising the price of electricity and refusing to raise the income of all employees except those already earning minimum wage. This IMF loan was lent through the IMF’s extended credit facility, but if loaned to Haiti through the IMF’s rapid credit facility the conditions mentioned would not have applied to Haiti. Is this really the kind of policies that will save Haiti? Will Haiti have to borrow again to pay of this loan? Once again healthcare, education and the country’s infrastructure will take a back seat to paying debts. How can we help Haiti right now and for years from now? We can help by putting pressure on the international community to cancel Haiti’s debt with a petition. Countries like Mozambique and Cameroon are examples of what debt cancellations can do for a developing country. Once free of debt, Mozambique and Cameroon were able to use their money for vaccinating children, fund national HIV/AIDS programs, and focus on education among other programs that will benefit their people. Haiti should be allowed the same opportunity.   There’s already 125,000 signatures on the petition to relieve Haiti of its debt. Let your voice be heard and sign the petition here.