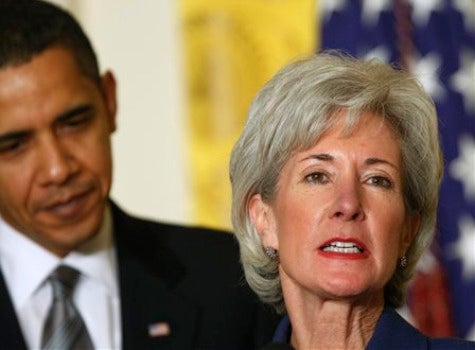 President Barack Obama has spent the past year traversing the country to pitch the benefits of reforming the American health care system, while Republican challengers have cast gloomy predictions about the “government takeover” that could happen if his plan passes. But how does the picture look if Congress does nothing at all? “Right now about 15,000 people a day are losing their insurance either because of job loss, rate increases, or because they have an illness that caused their insurance company to drop them,” Health and Human Services Secretary Kathleen Sebelius said Wednesday at a reporters briefing. She continued that insurers filed to increase rates by as much as 60 percent this year, despite the fact that, in 2009, the top five health insurance companies in America saw $12.7 billion in profits. “They will not give up profitability to keep customers,” Sebelius said. “They find it perfectly okay to continue to raise rates knowing they will drive people out of the market. There’s absolutely nothing that stops that.” With African-Americans disproportionately represented among uninsured Americans, there’s much on the line for us. As the House gears up for a final vote on the bill, here Secretary Sebelius details how the pending legislation stands to affect our community. Closing Racial Health Disparities The bill includes provisions to help close racial disparities in illnesses such as diabetes and heart disease, such as funneling $11 billion for community health centers in underserved areas, as well as funding for medical workforce diversity grants. “Having more minority doctors, nurses, and mental health technicians gives us not only a more culturally competent workforce, but it also gives us a better opportunity to staff some of the underserved areas,” said Sebelius. “Recruitment of health care providers from minority communities greatly enhances service in minority communities because there’s a significant likelihood that they’ll choose to practice medicine there.” Stopping Exclusions for Pre-existing Conditions “We know communities of color have a much higher ratio of pre-existing conditions, and what that translates to in the current marketplace is a barrier for health insurance,” said Sebelius, explaining that health reform would prevent providers from denying coverage for this reason. “Comprehensive reform creates a new marketplace, new bargaining power, and changes those insurance rules once and for all.” Providing Low-Income and Small Business Subsidies Health insurance reform legislations includes subsidies to help low-income working families buy insurance, as well as tax credits for small businesses to provide health insurance for their employees. “Small business owners are oftentimes paying rates that are two to three times what their competitors are paying, but if they don’t keep heath insurance coverage they lose their employees,” said Sebelius. “Subsidies for small business owners is one of the immediate deliverables that will start in 2010, right when the bill is signed.” Leaving Room For Improvement Many health care reform supporters are feeling disappointed and short-shrifted over the bill’s lack of a government-run public insurance option, but Sebelius suggested that more could be added to the plan later. “Whatever passes in 2010 will be continuously looked at and hopefully improved,” she said. “If you think about where Medicare was when it passed 45 years ago, it doesn’t look a whole lot like it does now. Technology and science will be changing, competition will be changing, and I think there will be a constant evaluation of what works and what doesn’t work.” Read more: