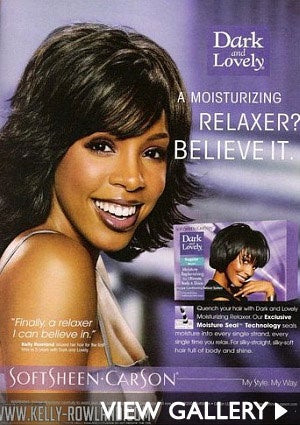 If you are a Black woman with hair–and we suspect that you are–it’s safe to assume that you’ve tried at least one of SoftSheen-Carson’s hair products over the years. Top-notch brands like Dark & Lovely, Optimum Oil Therapy and Carefree Curl have made the company the number one ethnic haircare company in the world! This year, SoftSheen-Carson is celebrating its ten year anniversary together–but prior to the merger a decade ago, SoftSheen and Carson had been providing cutting edge hair products and technology to Black consumers for more than one hundred years! Quick “hairstory” lesson: SoftSheen and Carson launched innovations like the first at-home relaxer, Dark & Lovely; and the first men’s depilatory brand, Magic Shave, which first hit shelves one hundred and eight years ago. To help commemorate SoftSheen-Carson’s milestone anniversary, we chatted with the company’s Senior VP and General Manger, Angela Guy, who filled us in on the legendary brand’s rich history–one that actually mirrors the modern history of Black haircare, itself. Read More: