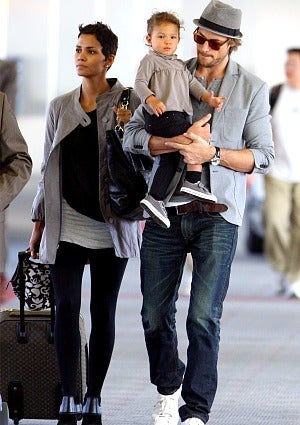 Since Halle Berry announced that she was pulling out of a film production to focus on a custody battle with her ex, Gabriel Aubry, over their daughter Nahla, news about the couple’s relationship continues to surface.

According to TMZ, a source close to Berry says Aubry was verbally abusive to the actress, even calling her the “N” word…

Now Aubry’s ex-girlfriend has stepped up to say that the model was “very disrespectful to women,” during the two years (2003 to 2005) that they dated, and that he “has always been a borderline racist.” Aubry’s former flame says she was surprised when he began dating Berry.

Both Berry and Aubry have been referred to as extremely jealous exes. People.com recently reported that Halle was very upset when photos surfaced of Aubry at a Lakers game with Kim Kardashian in early December. Sources close to Berry says she wasn’t jealous, she was just looking out for Nahla’s best interests.

“Halle couldn’t care less who Gabriel dates,” the source told People.com. “She just didn’t want Nahla exposed to the cameras that are undoubtedly around a reality star.”

A source close to Aubry maintains that, “There was never for a second a thought by Kim or Gabriel that Nahla would ever go near cameras.”