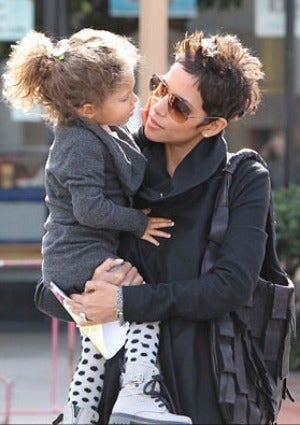 After being recognized for her role in Frankie and Alice at the 42nd NAACP Image Awards, Halle Berry took a moment to think of her adorable daughter Nahla. The Oscar-winning actress said she hopes her work makes the two-and-a-half-year-old proud and confident to be herself.

“I hope she is inspired, I hope she’s proud of me,” Halle explained to OK! at the Shrine Auditorium in L.A., “I’m sure she won’t like everything I’ve done but I hope she will appreciate that I dared to be myself and always did what I believed in. I hope those are qualities that I pass on to her.”

Berry, 44, took home the prize for Outstanding Actress in a Motion Picture for the yet to be released film “Frankie and Alice.” But awards or not, she said her greatest accomplishment is  being a mommy. “It is just joy, it’s joy. I wouldn’t say it’s the hardest work I do I would say it’s the best work I do,” Halle gushed.

Congratulations on your awards Halle and best of luck with your daughter!