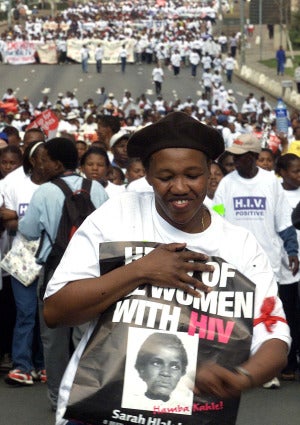 For years, many Black women believed HIV was being spread through our community by men who were having sex with both women and men — men who were secretly on the down low. According to a series of recent studies, it may be time to rethink that assumption. Dr. Kevin Fenton, Director of the National Center for HIV/AIDS, Viral Hepatitis, STD and TB Prevention at the Center of Disease Control and Prevention, says the fact is Black women are contracting HIV from men who have a variety risk factors, some we may be overlooking.

“What we are seeing now is that we’re in the midst of a crisis as far as HIV in the African American community is concerned,” Fenton said yesterday on National Public Radio’s Tell Me More. “It’s really important that we understand why and where the infection is spreading so we can take effective action. And part of that response must be to address some of the myths and misinformation.”

According to Fenton, there are a variety of ways in which African American women are becoming infected and having sex with a DL man is not high on the list. “The reality is that bisexual men only account for very, very small proportion of the overall Black male population,” says Fenton. “Our research suggests that about two percent of Black men will report being bisexually active.” Fenton says one in five Black women contracts HIV through intravenous drug use, while 80 percent contract the virus through sex with an infected male partner. “And their partner may become infected through either injecting drugs themselves, or through having multiple [female] sexual partners,” Fenton adds.

Instead of focusing on the myth of the DL man, Fenton urges women to look at the risk factors that are most prevalent in the community, such as having unprotected sex with a partner who is having sex with multiple women.

Fenton also addressed the commonly-held belief that some African American men are entering prison HIV negative and coming out HIV positive. In fact, says Fenton, “Although there is HIV transmission on going in prisons, it’s not at high levels as had been previously thought. What we actually believe is occurring is that there are a number of HIV-infected individuals who become incarcerated. So HIV is going from the community to the prison sector. ”

More to the point, explains Fenton, the disproportionate rate of incarceration among African American men means that there are fewer eligible men for women to partner with. Because of this, some men feel they have more opportunity to engage in multiple concurrent sexual relationships, while some women feel less empowered to insist on condom use, fearing they will lose their partner. “Black women are bearing a disproportionate burden of this disease compared to their White or Hispanic counter parts, ” says Fenton. “It’s really important we understand how this infection is spreading in our community.”