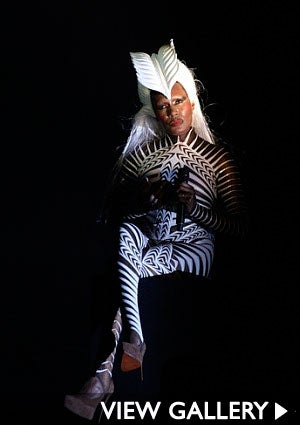 What’s not to love about Grace Jones? She’s fierce, original and tells it like it is. Pop music’s original diva of the night recently took on Lady Gaga in an interview with the Guardian newspaper. Asked how she felt about Gaga, Jones responded: “I really don’t think of her at all. I go about my business.” And what of accusations that Gaga had taken her style? “Well, you know, I’ve seen some things she’s worn that I’ve worn, and that does kind of piss me off.” Has Gaga asked her to collaborate? “Yes, she did, but I said no,” Jones responded. “I’d just prefer to work with someone who is more original and someone who is not copying me, actually.” Ouch. Jones is not the first artist to have some words for Gaga of late. “Paper Planes” singer M.I.A. recently called Gaga out on her music, saying it wasn’t as “weird” as she’d like us to believe. “She models herself on Grace Jones and Madonna, but the music sounds like 20-year-old Ibiza music, you know? She’s not progressive, but she’s a good mimic.” India.Arie also had some issues with Gaga and took to Twitter to discuss the “unspoken back story” of the video for “Telephone” co-starring Beyonce. “Crazy to me that the Dark, underbelly, shock at all cost thing is a trend,” Arie tweeted. Can we really talk about any artist being “authentic”  or “original” in the age of sampling? Admittedly, no other artists have brought avant-garde high-concept fashion to pop music quite like Jones and Gaga in the past two decades. But let’s face it, there is a fundamental difference between being influenced by someone and mimicking them. If Jones is calling Gaga out for wearing the same outfits, then call us petty, but we have a problem because we know when it comes to miss Jones, it’s all about R-E-S-P-E-C-T. Read More: