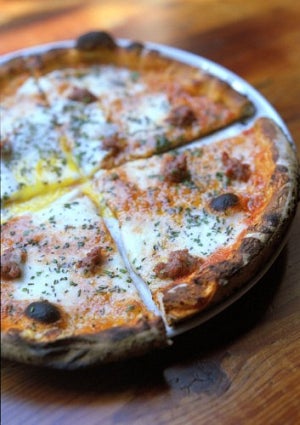 When it comes to pizza, you probably think of the quick, hot delivery food that’s perfect on game night or for those times when you’re just too tired to cook. So you may be surprised on your next date night if you hear your waiter suggest a crispy pie along with a glass of Pinot Noir. Although pizza-making has long been an art form, in recent years, pizza has evolved into a sophisticated menu item. What makes a pizza gourmet? Not only are chefs focusing on high-end, seasonal toppings (sweet figs, truffles, and imported cheeses, for instance) and specialty flours for crusts, but they are also paying close attention to cooking methods–wood oven, coal-fired, and grilled, to name a few. Details such as how much garlic is in the sauce, how gooey the center of the pie is, and how much char is on the crust separate one pizza-maker from the next. In urban centers, obsession over the new generation of pizza has reached a fever pitch. In Atlanta, food bloggers are following the “pizza wars” among the most popular slices in the city–Antico Pizza Napoletana, a new boutique pizza shop serving Neapolitan-style pies with imported Italian ingredients, appears to be reigning in top accolades. Spicy peppers, sopressata, and bufala mozzarella are all raved-about toppings, but minimal seating makes Antico more of a to-go spot. For a more romantic setting in Atlanta to enjoy pizza tableside, Baraonda Italian Restaurant’s thin crust brick oven pizza is a favorite. The Anatra pie features duck breast, pink sauce, sundried tomatoes and fresh mozzarella. In Philadelphia, the pizza might not be as famous as New York’s, but Marc Vetri’s Italian restaurant Osteria has developed a cult following for its thin crust pies. Vetri won the 2005 James Beard Award for “Best Chef Mid-Atlantic,” and his Zucca pizza (featuring squash, mozzarella, golden raisins, and toasted pine nuts), was listed as one of GQ’s America’s 25 Best Pizzas. Other creative choices for toppings here include octopus, pig’s head, baked egg, and cotechino sausage. And perhaps no city is more known for its twist on pizza than Chicago, which put its stamp on deep-dish pie. But even here, thin crust gourmet pizza is stealing the spotlight, perhaps due to the trend towards healthier eating. At Piece Brewery & Pizzeria, owned by rocker Rick Nielsen of rock band Cheap Trick, the focus is on New Haven-style pizza and award-winning microbrews in a loft-style setting. Choose from red, plain, or white pizza and add savory ingredients such as clams, meatballs, mashed potatoes, or BBQ sauce. The crust is given an olive oil, parmesan, and oregano base, and cheese options include feta, goat, and ricotta. Perhaps one of the best reasons to order pizza on a date? It’s perfect for sharing–now that’s amore! Read more: