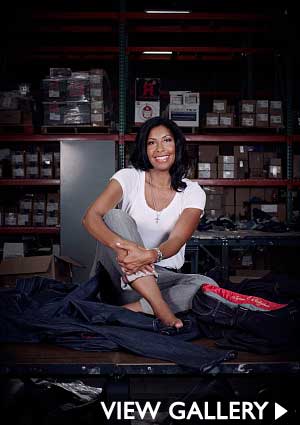 Cookie Johnson was all smiles in Beverly Hills yesterday afternoon, and rightfully so. While greeting guests–including director F. Gary Gray, Keisha Whitaker and of course, her husband, Magic–at Neiman Marcus’ shopping event for CJ by Cookie Johnson, she watched as pair-after-pair of her premium denim jeans flew off the racks. Mission accomplished.

Though her company is months shy of its first anniversary, she’s clearly struck a nerve with women whom are on the prowl for a great-fitting jean. “I have a small waist, but I’ve got hips, too,” she says, “so whenever I’d find jeans that fit over my hips, they’d be huge [everywhere else].”

Last fall, Johnson, a former fashion buyer, expressed her frustrations to Michael Glasser (of Seven Jeans fame), and by February, CJ was born, and on sale at six Nordstrom stores. Fast-forward 10 months and the line–which includes five different fits and multiple washes–is available at 100 Nordstroms, 35 Neiman Marcus’ and six Bloomingdales stores (and on their websites) as well as 400-plus specialty stores across the country.

“Never in my wildest dreams could I have imagined that things would have taken off this fast,” admits Johnson, who counts Janet Jackson, Star Jones, Angela Bassett, Natalie Cole and Oprah among her supporters. Next season, she’ll add white and khaki denim, jackets and shorts to the mix, but she promises to keep the recipe simple. “The great thing about our jeans is that they all have a certain amount of stretch in them and the waistbands are tapered,” she adds while modeling ‘Faith,’ a pair of her straight-leg, rinse jeans. “Also, each pair is woven with a little bit of self-esteem.”

So, who, exactly, is the CJ woman? Johnson has the answer. “She is between 16 and 75 years old. She’s contemporary, fabulous…and she’s got curves!”