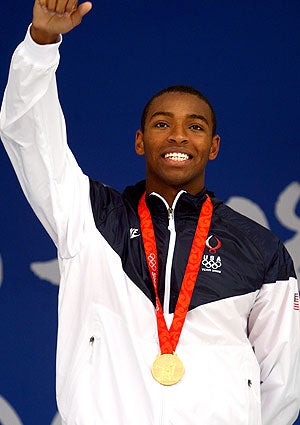 In one of the most exciting moments from the Beijing Olympics, Cullen Jones solidified his place in sports history. He was part of the gold-winning 4-by-100 freestyle relay with Michael Phelps, Jason Lezak and Garrett Weber-Gale that managed to beat the favored French team by eight one-hundredths of a second.

When it comes to his new found fame, Jones believes timing has a lot to do with it. “You have Michael [Phelps] going for eight gold medals and actually getting it,” Jones said. “The way that we finished that relay I mean we were shocked when we came back to the U.S. and I had people coming up to me and going like, ‘hey, can I get your autograph’?”

While he’s the second Black American swimmer to win gold in the Olympics, the Irvington, New Jersey, native almost didn’t get his golden ending.

“When I was five years old, I almost drowned,” Jones said. “And my mom got me into lessons instantly. Rather than shield me away from or keep me afraid of the water, she gave me the tools to be better and to feel comfortable around the water.”

His mother’s reaction changed the course of his life. Jones fell in love with the water. “I told my dad at 11 years old ‘I love swimming; this is what I want to do’ and I broke his heart because he wanted me to be a basketball player,” Jones said. “Luckily, my mom had my back in this and she was like, ‘nope, just support him. This is what he wants to do.'”

While he’s still training, Jones is now also the face of the USA Swimming Foundation’s Make A Splash initiative to highlight drowning prevention. “We have a goal of no kids drowning,” Jones said. “There is a solution for drowning and that’s swim lessons. We’re able to give lessons at no cost or low cost to these kids.”

USA Swimming says they have found the perfect front man for their initiative. “Not only did kids engage around the sport twice as often when they have a model like Cullen Jones, but they stay twice as long when they have someone that they can emulate,” said John Cruzat of the USA Swimming Foundation.

In just the last year, USA Swimming says nearly 150,000 kids have been a part of the program. A 2008 University of Memphis and USA Swimming Foundation study uncovered some alarming drowning statistics. Blacks and Hispanics are almost three times more likely to drown than whites in the United States and nearly 60 percent of Black children can’t swim.

According to the U.S. Centers for Disease Control, fatal unintentional drowning rates for five- to 14-year old Black children are 2.6 times higher than those of white children in the same age range. Overall, nine people drown every day in the U.S.

The reasons behind the racial disparities are varied. Jones points to the lack of pool space and coaches in minority neighborhoods let alone segregation during the 1950s and 1960s. Back then, it was not uncommon for Black people to be banned from white-only beaches and pools. Some hotel owners went so far as to throw acid into pools to keep Blacks away.

USA Swimming also found a legacy of non-swimmers in a family is another problem. “Fear is the biggest thing because typically in communities of color you’ll have two or three generations of non-swimmers that for whatever reason didn’t have access to programs,” Cruzat said. That fear of the water tends to get passed from one generation to the next. And if the fear isn’t of drowning, it is often related to what the water will do to the ‘do.

As for those outlandish claims that Black people aren’t buoyant enough to swim, Jones says it is true that he can’t float. “I literally sink,” Jones said. “But that doesn’t stop me from being an Olympian. I can move very fast on top of the water.”

Armed with the statistics, Jones travels the country talking to kids about the importance of getting swimming lessons, making sure that his message hits home. At a middle school in Los Angeles, Jones asked, “Do you know that in L.A. alone, 85 people–85 kids–drown every year? Ninety percent of those kids–90% of them are actually being watched. There are lifeguards there.”

After each assembly, Jones hits the pool with a few of the students to give them one-on-one lessons. Jones, who lost his father when he was 16, said some of the students’ stories resonate with him. “There was one of the kids that I just taught, his dad passed away three years ago and he had never been in the water again and today was probably his first time he actually ‘swam swam’ again,” Jones said. “And when I say ‘swim swim,’ I mean like really getting up and doing laps. And that definitely touched me because I can definitely sympathize with that.”

On the day that Jones’s father died, he went to practice. “The whole family was really upset with me except my mom ’cause she understood that that was a coping mechanism for me,” Jones said. “I went into this practice and had the best practice of my life because I was so upset and I just left everything in the pool.”

As for the Olympics, Jones is hungry for more hardware. “I expected to swim the 50 freestyle in 2008 and I didn’t get that opportunity so I’m really hungry to try to go back in 2012 and swim the 50 freestyle,” Jones said. “I kind of took it out on the pool this summer and got the American record so I’m pretty happy. I think there’s a lot more in the tank, so in 2012 I really want to make a bigger name for myself so we’ll see what happens.”
For more on this story check out “What Matters” on CNN Headline News.

For more information on the Make A Splash events, log on to www.usaswimming.org.

Stephanie Elam is a CNN business news correspondent. Her reports can be seen on CNN/U.S., Headline News and CNN International. She also contributes to American Morning. Previously, Elam was the co-host of Black Enterprise Report, a nationally syndicated program focused on business, career and financial education.