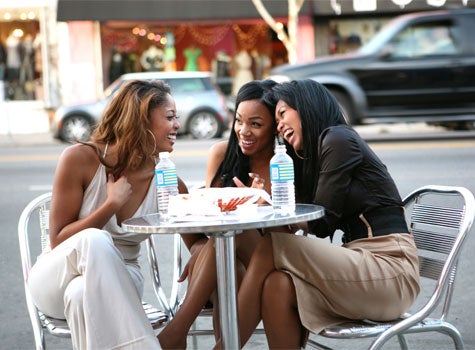 One of my favorite Patti LaBelle songs is “Stir It Up,” from the film “Beverly Hills Cop.” The lyrics of the song are great, as Patti sings about making changes to her life since it has not been going the way she planned. The best part of the song is the chorus as Patti’s voice floats over: “Stir it up… gotta break it up now. When I think about tomorrow… ooh I can’t wait to stir it up.”

Over the weekend, I met two of my sister-friends from college for brunch in Harlem. We try to get together when we are all in town because it is very rare that we are at the same time. I look forward to these gatherings to catch up with them and reminisce. It is always a great meal filled with laughter and good ole fashion trash talking.

This time, however, the mood was a bit somber. I could tell one of my sister-friends was a bit down and out. While the other was fine, she also discussed having had some recent difficulties. We discovered that we were all single again after having been in long-term relationships. I thought, “Oh Lord, not another group of mid-thirties single New Yorkers at brunch.” What a cliche! I hate cliches, let alone being one.

I asked my sister-friend if she was okay and she lamented that she was contemplating leaving the city. She had found herself in a rut. Not just in dating, but also with her job and other aspects of her life in New York. The brutal winter had not helped and she was looking for a change. My other friend and I completely understood where she was coming from.

They say if you can make it in New York, you can make it anywhere. I don’t think there is a truer statement about the “Big Apple.” It’s a rough city. And, with all of the activity and people, it still can be very lonely, especially when it comes to dating. I’m not quite sure if it’s the plethora of options or the constant movement of the city, but New York City is an obstacle course for dating.

My other sister-friend then began to share how she too had found herself over it and wanting something new. She then said, “I decided that it wasn’t the city that was in a rut, but it was me.” I am a firm believer that your joy starts and ends with you. It’s not geography, friends, family, work or anything else outside of you. So, my ears and attention perked up.

She went on to explain how she’d decided that she would “change it up!” She made an effort to change her routine and start doing things outside of her norm. We all know it’s so easy to slip in and stick with your routine — a comfort zone. For example, she started attending play readings by herself. Not only had she enjoyed the readings, she also “met a couple of cuties.” Double score!

Then, my sister-friend who was a bit down started sharing some of the new things she had added to her schedule. She’d recently joined a cycling club and was cycling on the weekends. This prompted us all to begin to analyze ways in which we could “Stir It Up” and open our opportunities to meet new and exciting people.

What I liked most about our discussion was the proactive, self-empowerment nature of it. I get upset when people just wallow in their own self-pity instead of taking action to change their state of mind. None of us were willing to accept our plight, but were eager to do something about it. It was so encouraging! I will be going cycling and I will be attending the next play reading. You never know!

We all experience slumps and find ourselves in the rut of our daily routines. Too often, we look to things outside of ourselves to solve the problem when the power lies within us. If you’re experiencing a rut, whether in general or in dating, maybe you should take a moment to do something different and “Stir It Up!”