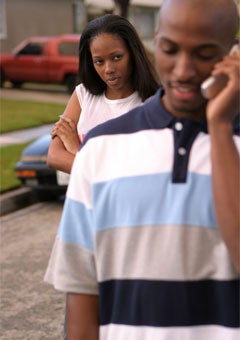 The Governator, Arnold Schwarzenegger, is at the center of a scandal involving his 20-plus-year affair with the family’s housekeeper. The relationship produced a child and lasted almost as long as his marriage to Kennedy clan member Maria Shriver. Beyond the uproar of the affair, there is a lesson to be learned by all mistresses: men leave when they want to leave…

I have never understood the concept of an affair with a married person or even a person in a relationship. From the jump, you’re playing second fiddle to someone else. It might be my vanity or arrogance, but I’m no bench warmer. Moreover, I believe that karma is a boomerang; what goes around comes back around.

Ironically, this past weekend I was visiting with one of my dearest sister-friends and she had another friend over, “Tracy.” It turns out Tracy has been in a 3-year affair with a married man. She made some demands on the guy before traveling to meet to us. In her words, “[She] had put her foot down,” before she left. He had not responded the way she had anticipated and so she was asking for our advice.

It took everything in my power not to say, “You big dummy, how are you going to put your foot down with someone else’s husband!?” Instead, I opted for the more subtle approach. I asked Tracy what she expected from the relationship. She said she expected him to treat her like “his girlfriend” and not like “his trick.” I couldn’t resist, “But, isn’t that what you are?”

Tracy went on to explain that he was planning on leaving his wife, after which they were going to get married. She knew where she wanted the wedding, the dress and the first song. Wow! I paused for a moment — just long enough for her to come back from Fantasy Island.

I asked her what was causing the delay, since the affair had been going on for three years. She said his wife was dragging her feet with the divorce. Okay?! I pushed her a little and asked if she had any evidence that he’d filed for divorce. Her response, “No, but [she] trusted him.” Girl!!!!

My sister-friend looked at me, rolled her eyes and then gave me the thumbs up look to go for it. Lesson #1: Men leave when they want to leave. If a man is fed up with his marriage, he leaves it.  Look at Arnold, sure he carried on the affair for 20 years and fathered a child, but there is one thing he didn’t do… leave Maria Shriver. Ultimately, she left him!

Lesson #2: Divorces take a while, but they don’t take forever. If someone is telling you they’re in the process of a divorce and it’s year 5 and still living with their wife, then chances are they are not in the process of a divorce. Now, some divorces take some time to wrap up all details, especially if there are significant financial assets involved or custody issues. However, those people typically are living separately and it’s clear they’re in divorce proceedings.

Lesson #3: How you get him is often how you lose him. This is a big one! I don’t understand why, even in her best case scenario, if he leaves his wife and marries her, how she comes out on top. She is going to say, “I do” and put her trust in a cheater. Yes, she may romanticize that his wife is the Wicked Witch of the West and doesn’t understand him like she does, but she’s probably not. He’s just a cheater.

We talked for hours about it, debating and arguing. The problem is that Tracy is a smart girl who has convinced herself that what she’s doing is right. And, it’s not right. It’s dead wrong.

With that said, it is not my place to judge her or tell her what to do. I was trying to get her to see that this fairytale ending she’d conjured up (and he’d promised) was probably not going to happen. Moreover, she entered a situation that was set up for failure and misery, yet she was expecting sunshine. She was always going to be a second thought — a bench warmer.

Needless to say, none of it sank in, because while we were away he called and asked her to come visit him at a conference. She packed her bags faster than you can say, “Trick!” The thing that pissed me off the most is that he had her buy the ticket for him to reimburse. I know, just plain ol’ dumb!

If you’re like Tracy or the Schwarzenegger’s housekeeper and find yourself in an affair (I refuse to say relationship) with a married or committed man, take a moment to evaluate what your goals are and what you’re getting. If you don’t mind being the second choice and always in the shadows, then more power to you to continue doing what you’re doing. But, if you want more from your life, like your own man, then leave that married man alone… he’s probably not leaving!