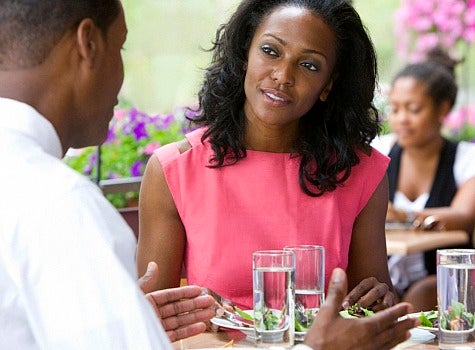 I despise the grocery store, but one of the lessons I wish I had learned from my mother is how to grocery shop. In general, my mother is meticulous about everything. With grocery shopping, she takes it to the next level. Whether it’s produce, meat or bread, she painstakingly selects the best quality for the best price. She has standards, and anything she buys must meet those standards.

About twelve years ago, my best friend Danielle told me that she only wanted to marry a man whose parents were still married. At first, this offended me because my parents are divorced, and I consider myself pretty grounded.

Over the years, I have come to understand why she said that and what she meant. Basically, she wanted to marry a man who had a model of a successful marriage which he could reference. It was a standard she had set for herself and her future husband. Thankfully, she found a man who met her standards, and they’ve been happily married for years.

One of my other sister-friends has not been so lucky in love. Her eight-year marriage ended in divorce. Now she’s been dating a guy for about four months, but they’re constantly having problems. He’s not a bad guy, but they’ve been arguing from day one. It’s out of character for my sister-friend to be contentious with anyone, let alone someone she’s dating.

Perplexed, my sister-friend asked what she should do about this guy. On one hand, she really enjoyed their time together… when they weren’t arguing. On the other hand, she thought they argued much too often. I asked her, “Do you know your standards?” She quickly replied, “Yes, of course.” The question is not as simple as she thought, and I challenged her to think about it a little deeper.

“I don’t mean height, hair color, etc. Do you know what your standards are beyond the superficial?” What type of family background does your ideal man have? Education? Cultural interests? Relationship with his family? Spirituality? Exercise and fitness goals? Political views? And the list went on, depending on what was important to her.

My sister-friend, who is pretty easygoing, thought I was being “too rigid.” She’d been reading those so-called advice books for women that told her to be more flexible in what she was willing to accept from a man. I couldn’t disagree more. Why should she be flexible in her standards? Men certainly aren’t!

To put it plainly, I went to my not-so-inner alpha male. I said, “If you were going to buy a car, do you just show up at any car dealer and hope for the best? No! You set some standards or criteria for the type of car you’re looking for.” If you’re a Mercedes kind of person, why waste your time at Hyundai? Once you’ve set your standards, it’s easier to determine which car is right or wrong for you. Not to say you don’t have flexibility — instead of a Mercedes, you might get a Beemer, but you certainly don’t buy a Yugo.

The same is true in dating. How could my sister-friend avoid getting guys that didn’t meet her standards if she didn’t know them for herself? Quite frankly, the reason why she and the guy were arguing all of the time was because he did not fundamentally meet her standards.

My sister-friend is an eternal optimist. The guy she is dating is consistently pessimistic. She is highly educated. He’s educated, but not at the intellectual level of my friend. Her idea of a good night is a movie and dinner. He likes to party all the time. She’s ambitious. He’s content. She goes to church every Sunday. He hasn’t been to church in years. You see where I am going with this. She had no business dating him in the first place.

With that said, I would never tell one of my sister-friends not to date a guy. People need to reach those conclusions on their own. However, what I did was point out the many deficiencies in their relationship, and they all stemmed from her not properly defining and knowing her own standards. The guy was handsome, fun and “not psycho.” All too often I see my girls settling for “not psycho” in lieu of what they really want.

I don’t know if she will end it with the guy or not, but she has made a list of her standards. She has said it has made a world of difference in her thinking about dating. It has also put an even further strain on their relationship, as she is more aware that the guy just doesn’t cut it. Whatever she decides, she now has a barometer by which she can evaluate him and the next guy she meets.