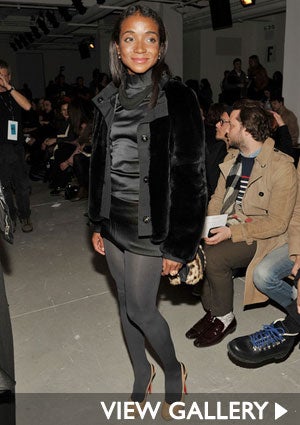 A lot has been written and assumed about Genevieve Jones’s background over the years. Tongues have been wagging since she broke into the elite New York social scene with a vengeance. Armed with a jaw-dropping wardrobe of designer wears and a crew of famous fashion friends to boot, Jones immediately became the center of attention with the paparazzi capturing her nightly excursions and outfits. With no apparent occupation, it was inevitable that the haters would come running with flamed torches in hand ready to crucify Jones for being a pretty face with influential friends. The backlash got so bad after a 2006 Teri Agins’s profile on Jones’ that the petite “It Girl” returned home to Baton Rouge until all the drama died down. Today, Jones is still one of the most photographed women, but she’s put to bed the debates over her lack of talent by launching a glam jewelry and bag collection that has, like herself, become a hit seemingly overnight. Her intricate pieces and bags have adorned the likes of Rihanna, Kate Moss and Kim Kardashian. We’re glad all the hoopla and speculation about our favorite stylista are pretty much dead, so now we can turn our focus back to the reason Jones caught our eye in the first place and that’s her amazing personal style. Blessed with the kind of lithe frame that is made for designer frocks, Jones, who has been a muse to designers like Zac Posen, hardly ever plays it safe when it comes to fashion. She draws inspiration from a myriad of styles like lady-like chic, retro vintage, minimalism and femme fatale to infuse lots of individualistic charm into her revered ensembles. With no one style to call her own, it’s not surprising that Jones’s closet is made up of diverse designers with contrasting aesthetics. Marc Jacobs, Zac Posen, Rodarte, Balenciaga, Alexander Wang, Thakoon and YSL are all in the mix. One thing you’ll most likely never find are jeans. Jones is a perpetual dressed-up kind of gal, so anything as casual as denim doesn’t register with her. Instead, Jones clearly gravitates to off-beat dresses in dizzying prints, high-waisted shorts, and skirts all in sky-high hemlines to show off her game. No matter how sexy her silhouettes may be, Jones quirky approach to fashion always adds a dose of whimsy to her looks. Take for instance when she paired a shrunken, leather varsity jacket with an opulent brocade mini for a playful take on luxury or her affinity for wearing ankle socks with her sandals. There are few women who can pull off Jones’s looks. While mini’s are in constant rotation in her wardrobe, recently we’ve been spotting Jones looking effortlessly elegant in floor-sweeping, maxi skirts. No matter what the details of Jones’s past are, one thing’s for sure, we’re completely infatuated with this style maven. Read More: