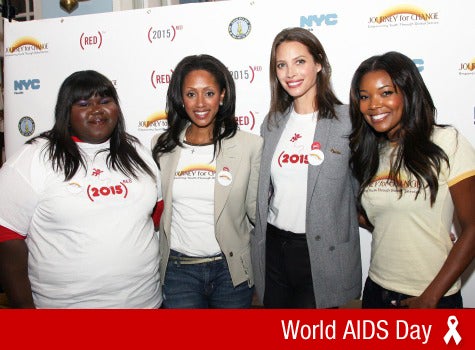 Actress Gabrielle Union wants every Black woman to know the three things that will protect her against HIV/AIDS. “Get tested to find out your status, have honest, accurate conversations about sex, your sexual history or your sexuality and demand that same honesty in return,” says Union. “Don’t sell yourself so short that you’re willing to trade your life for acceptance by way of sexual gratification.” Union was one of a number of celebrities invited yesterday to help raise awareness for World AIDS Day in Brooklyn, NY. Malaak Compton-Rock, founder and director of Journey For Change (JFC): Empowering Youth Through Global Service and about a two-dozen of her JFC global youth ambassadors invited Union, actress Gabourey Sidibe, former supermodel Christy Turlington and a number of city officials to Borough Hall in Brooklyn, NY to light the building in red and talk about the booming HIV/AIDS statistics in Brooklyn. The numbers are staggering. Brooklyn has been labeled the epicenter for people living with the disease in New York City, especially Black women and adolescents. According to a 2009 report published by the Centers for Disease Control, New York State has the highest number of people living with HIV/AIDS in the country and 25 percent of those cases are in Brooklyn alone. It was all Gabrielle Union needed to hear to want to come out to spread the word. Union also implored Black women to use their best friends as a resource during the holidays. “Practice talking to your girlfriends about these feelings of anxiety you may be having about getting tested and why,” she said. “Go together as a group. Instead of having Secret Santa, go together as friends to get tested and then deal with whatever happens together as a group.” In 2009, Gabourey Sidibe made her mark in Hollywood starring in “Precious” where her character learns she is HIV positive. But the disease has more meaning to Sidibe, who grew up in Brooklyn and actually lost her second cousin to AIDS in the 1990s. “We didn’t know for a long time that she had AIDS,” says Sidibe. “She told us that it was cancer. There’s some shame that goes with the diagnosis and she didn’t know how to tell our family.”   Some 20 years later, Sidibe still believes it’s the stigma of having a sexually transmitted disease that keeps people from finding out their status or seeking out help. “There’s so much education and information about prevention these days, to admit that you had it is like admitting you just didn’t pay attention.” Even after World AIDS Day, Journey for Change–a global service program for at-risk youth from Brooklyn–will continue to be HIV/AIDS advocates. Their work both here and in South Africa is part of what attracted these famous faces to lend their celebrity. Together they will bring attention to what the United Nations calls an attainable goal–ending mother-to-child transmission of HIV/AIDS by 2015. Working with Rock and New York City officials, the JFC ambassadors were also there to spread the word on a newly created campaign called, “Brooklyn Knows,” which encourages every Brooklynite to get tested and know their status. “I don’t think people of my generation have done enough,” remarks Sidibe. “But these kids have taken on a huge part of this because they have to.”