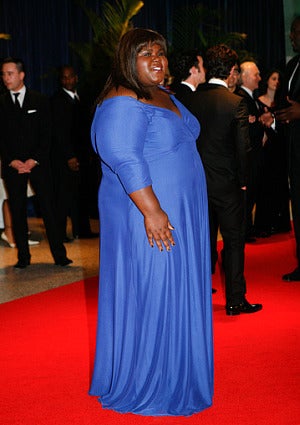 Gabourey Sidibe is in the news cycle again, except this time reporters aren’t praising her for her charm or acting skills. Rather they’re in a tizzy over her supposed bad attitude at the White House Correspondents Dinner last weekend. Washington Post reporter Jonathan Capehart recently blogged about how the “Precious” star snubbed him after he walked up to her during dinner and the following exchange took place (according to Capehart):

Capehart: “I know you’re having a good time and I’m sorry to interrupt.” Sidibe: “Yeah, Come back in five minutes!”

“Thinking she was joking, I laughed and pretended to walk away,” continues Capehartart. “When I noticed that the look in her eyes meant she was serious, I walked back to her and said, ‘I just wanted to congratulate you on your nomination. I thought your performance was spectacular.” After which Capehart retreated–seemingly wounded–back to his seat where he spoke with fellow WaPO reporter Jo-Ann Armao who described Sidibe as “horrible.” We may never know whether or not these stories happened exactly as they are told (there are lots of nuances only someone who was there could experience), nor do we know whether Gabby didn’t feel like being bothered while eating her dinner–and, ahem, she did say come back in five minutes. What is surprising is why Capehart, a respected journalist, would choose to air such a personal encounter in as public a platform as the Washington Post.  Equally bothersome is why Capehart and other journalists who have recently come out with “mean” Gabby stories is the tone they assume, as though she should somehow feel indebted to reporters. Was this exchange deserving of a whole column in the Washington Post? Seems to me giving Gabby a little advice about the kind of “manners” reporters expect from actresses would be a lot more helpful than taking one exchange and letting it define her overall character.