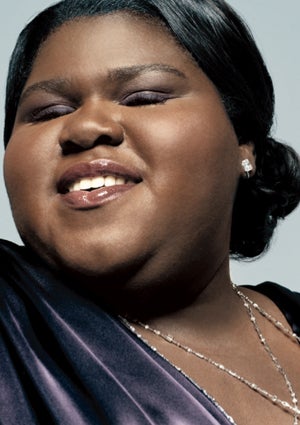 All we knew of her last fall was that she was making her acting debut in that much-whispered-about indie flick.  We were still learning to pronounce (and spell!) her name when, in a flash, “Precious” caught the world’s attention and Gabourey Sidibe became a mainstream superstar.  Earning that coveted Oscar nod and an NAACP Image Award was just the icing on the cake.    Tonight, the 27-year-old native New Yorker – now, affectionately-known as, simply, “Gabby” – introduces us to her new character, Andrea, on the Showtime series, “The Big C.”  Without giving too, too much away, we’ll just say that she’s a real piece of work!  Sidibe took a break from packing boxes for her interborough move to speak with ESSENCE.com about her latest gig, why she can take a joke and the advice she wishes she had imparted on herself. ESSENCE.COM:  After all of the Oscar buzz, how does it feel to be settling into a new role? GABOUREY SIDIBE: First of all, it’s amazing that I’ll forever be known as an Oscar-nominated actress!  [Acting] isn’t what I’d planned to do with my life, so just knowing that Precious wasn’t a fluke for me is really an awesome feeling.   ESSENCE.COM:  So, tell us about Ms. Andrea. SIDIBE: Andrea’s sassy and colorful, but she’s kind of mean, too.  That’s her defense mechanism. ESSENCE.COM:  Speaking of mean, Andrea’s teacher (portrayed by Laura Linney) tells her that she has two choices in life – either she can be “fat and jolly or a skinny bitch.”  As a full-figured woman, did that line offend you? SIDIBE: I have a very sick sense of humor, so I thought it was hilarious! [laughs] Besides, I know jolly, fat girls and bitchy, fat girls, so perhaps it’s not an either/or situation. ESSENCE.COM: Perhaps! You enjoyed quite a ride while promoting Precious. Which experience was the most fun? SIDIBE: My first, really fun moment was sitting on Conan O’Brien’s couch and then, there was SNL!  I love Saturday Night Live and at one point, I was watching it like six times a day on Comedy Central.   Because I’m such a fan of the show, it was ridiculous that I would get to host it, which is not something I’d ever considered. ESSENCE.COM: You’ve become a symbol of self-love and empowerment. Was that your intention? SIDIBE: It was a happy accident, actually.  People thought I should hate myself because I don’t look like ‘the norm,’ but what is the norm?  I absolutely believe that you can be anything you want to be and should love yourself, no matter how you look or what anybody thinks. ESSENCE.COM: Knowing what you know now, is there anything you wish you could’ve whispered to yourself last year? SIDIBE: I would’ve kept it simple and said, “It’s going to get a little weird, but you’ll make it through.  Just be cool – just be you.” “The Big C” premieres tonight at 10:30pm on Showtime.