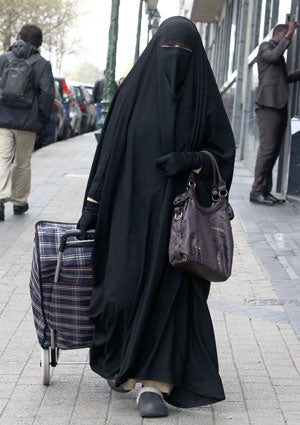 A big ol’ discrepancy has brewed since the implementation of France’s anti-veiling law created headline-making outrage and surprisingly widespread support. The chasm between justifiable precaution and just a flat-out abuse of power — and a weird one at that — has made our predominantly Catholic ally seem a bit bigoted against its five million Muslim residents. The female ones, anyway.

The law claimed its first victims last week when two women were cited in separate incidents for wearing burqas in public. The most recent devotee-turned-criminal was given the choice to pay a hefty fine or register for citizenship classes. Perhaps the genius behind this movement, Daniel Bacquelaine, should do that himself. He ostensibly proposed the bill not because he was targeting Muslim women, but because “wearing the burqa in public is not compatible with an open, liberal, tolerant society.”

Ah, open and liberal France. Interestingly enough, leadership ain’t ne’er had opposition to women lying topless on the beach, flashing their breasts in public or rocking thongs out in the open. The French have even poked fun at us prudish Americans who keep our tiddlywinks under wraps, whether it’s because we are, in fact, more conservative or because the law tells us that we have to. Thanks to a government that lets us be free, but not that free, we can all breathe a hearty sigh of relief that not just any ol’ body can strut around braless in a G-string (God bless America, by the way).

But there’s a definitive element of Islamophobia swirling around the change. Clearly, there’s a big difference between what normal folks consider a menace to society and what inspires French officials to create protective laws.

Let’s review: men who wear black trench coats and combat boots in July pose a threat. Anyone who slides a ski mask over their face and reaches into a bag or pocket? Yeah, they pose a threat. Social degenerates who pepper their public outcries with the words “bomb,” “kill” or “blow this building up” pose a threat. But women rocking burqas, college-aged girls to senior citizens, do not. In fact, the instances of a lady pulling an assault rifle from underneath her veil or deploying an explosive device from a chin strap shielded by the flowy fabric are pretty few and far between. Being Muslim doesn’t make a person any more likely to be a terrorist than being Christian makes them susceptible to become a poison-drinking cult follower. France is just jumping on the international bandwagon to make villains out of the most persecuted and grossly misunderstood religious group since 9/11.

If the open, liberal society excuse doesn’t move you, the president offers women’s lib as a reason to ban the garments. I agree that burqas, heck even kimars, are oppressive. Why should a woman’s obedience to God, her faith and — let’s be honest — her husband and other men, be marked by a willingness to hide her beauty? Modesty is one thing; obscuring her natural femininity is quite another.

To add insult to injury, I’ve seen couples in the sweltering heat: she’s drenched in hot fabric with only her eyes getting any ventilation; he’s strutting in weather-appropriate shirt and pants. He’s free; she’s not. He’s cool; she’s hot. But just like I think burqas themselves are oppressive to women, the laws designed to ban them are oppressive, too. No government should hand down an ultimatum that a lady practicing her chosen religion should be forced to become a lawbreaker in an effort to observe the logistics and traditions that in no way hurt or harm anybody else. It’s her personal choice if she wants to veil.

In other words, mind ya business, President Sarkozy and company. Once upon a time, expatriates like James Baldwin and Josephine Baker fled to the freedom of France because of their more open-minded views on race, sexuality and alternative living. It’s a good thing they weren’t Muslim.