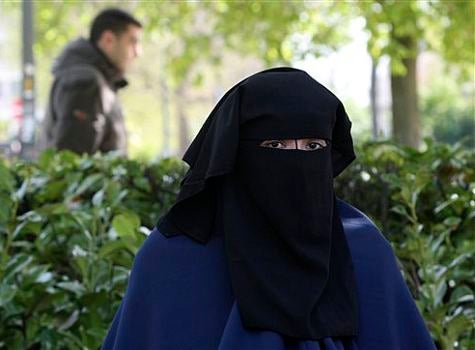 France has unveiled a new policy banning burkas and niqabs, the facial veils worn by Muslim women. The hotly contested ban comes after months of debate about women’s rights, religious rights and national identity. The law passed with 335 votes to one in the French parliament. The one opposing French parliamentarian called it “nothing more than the fear of those who aren’t like us, who come from abroad… who don’t share our values.” The ruling comes as no surprise in a country where over 80 percent of citizens are said to be in favor of banning the veil, according to a poll from the US-based Pew Research Center. Women caught wearing a burka will be fined $190 and anyone who forces a woman to wear one faces up to a year in jail and a $38,000 fine. As a woman I can’t help but wonder what I would do if someone — whether a religious leader or the government — were to tell me what I could or could not wear. My mind screams, “Oh hell to the naw.” But perhaps it would be most insightful to hear more opinions from Muslim women who have worn the burka. Only then can we really talk about choice because, who knows, for some women it might be liberating and a chance to release themselves from the “male gaze.” Critics of burkas think of them as an example of oppressive measures taken against Muslim women, but if we’re going to decry religious leaders for forcing women to wear burkas and niqabs, then why should it be acceptable for a government, any government, to do the same? If there is evidence that Muslim women are in fact “forced” to wear burkas, is this law not also forcing them into submission, but with a Western face? Plenty of Muslim women are in favor of the ban. “I support banning the burka because I believe it equates piety with the disappearance of women,” Egyptian feminist Mona Eltahawy told Salon.com. “I often tell (feminists) that what they’re doing is supporting an ideology that does not believe in a woman’s right to do anything. We’re talking about women who cannot travel alone, cannot drive, cannot even go into a hospital without a man with them.” In an opinion piece in the Huffington Post, Boston University journalism professor Caryl Rivers says there’s a difference between the burka and the headscarf. She writes: “A woman in a burka perceives the world around her, because a small slit is provided for her eyes, through which she can peer out. Tellingly, though, her mouth is completely covered. The symbolism is shriekingly obvious. In public, women must be silent. The public sphere belongs to men.” Where do you stand? Do you think a ban on burkas is warranted? *A burka covers the eyes and the entire body, while a niqab leaves the area around the eyes uncovered.
Loading the player...