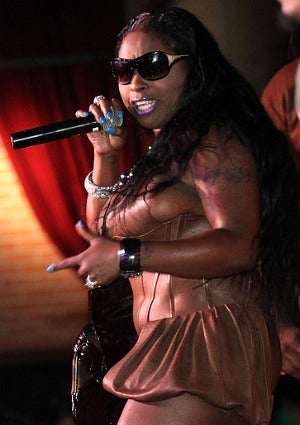 It looks like New York Fashion Week got a little messy for Foxy Brown. The rapper was recently escorted out a fashion show party after arriving on the scene visibly intoxicated, TMZ reports…

Apart from being under the influence, the ‘lil Na Na’ rhymer showed up hours late to a performance.  Sources at Red Bull Space in Soho — the venue that hosted the after party — told TMZ that Foxy showed up at 1:20am, roughly ten minutes before the entire party closed down.

After locking herself in a bathroom, security came and escorted the rapper from the party. Although Brown’s rep refused to comment on the incident, we know this isn’t the first time she’s showed up tardy for the party. Brown has canceled concerts before and was a no-show for a recent Lil Kim diss concert.