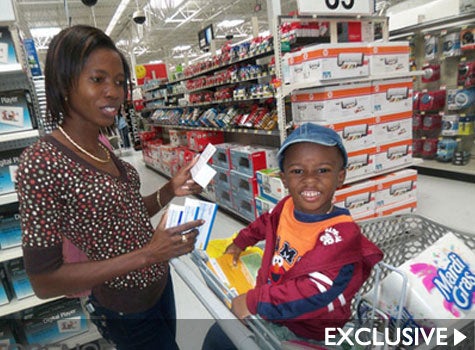 Four-year-old Marquel Peters always managed to grab two drumsticks from the church musicians to bang on the drums. On New Year’s Eve, during an intermission at Church of God of Prophecy in Atlanta, Marquel’s mother Nathalee had to race to the front of the church to pull him away from the players equipment. They walked back to their seats and the happy boy started playing with his Nintendo game. It kept him still. Meanwhile, Nathalee’s favorite part of the service began. “Our church sister started singing,” she says.  The working mother stood up, humming along to the notes, while noticing her high-energy son’s video game on the floor. As she reached down to pick up the fresh Christmas gift she heard a loud pop.

A confused Nathalee turned around. “I thought that something fell from the ceiling, but all I saw was blood,” she says.  Her son had blood gushing from his head and she didn’t know why.  “He started crying,” Nathalee says. “I grabbed him up and started to run for help.” A few concerned congregants called 911 while most were still unaware of what was happening. There was no clear indication as to what hit the young boy.

Paramedics arrived to take the child to the hospital.  A CAT scan showed a stray bullet inside Marquel’s head. Hours later he was pronounced dead. Marquel Peters was Nathalee’s only child. ESSENCE.COM spoke with Marquel’s mother about the incident happening at church, what she hopes for the most now and why she decided to go back to the sanctuary the following Sunday.

ESSENCE.COM: Thank you for speaking to us at such a difficult time. What are some of your emotions or feelings right now?
NATHALEE PETERS: Well, I am just…it is hard. It is hard. I am trying to do my best– trying to hold up the best way I can. It’s real hard to do it. But I have my sister and brothers who are giving me a lot of support, so I thank God for that.

ESSENCE.COM: It seems that in a situation like this it would be easy to lose faith. How are you keeping your faith, or have you lost it?
PETERS: I am keeping my faith and just trying to hold on the best way I can.
God knows what’s best. I don’t know why, but he knows what’s best. I am not trying to question him either. I am just keeping the faith that this person is going to come forward one day and say, “I am the one who is responsible for this.”

ESSENCE.COM: It seems you want justice for your son’s death. Can you explain your feelings?
PETERS: I really want them to find this person. I really want this person to come forward. I am praying about it and keeping the faith that whoever is responsible for the death of my son will be found. I miss my son so much. I keep thinking about him.

ESSENCE.COM: The ESSENCE online community sent out many condolences to you and your family. What would you like to say to the readers?
PETERS: This is really a big loss for me. He was my only child.  To all those who are out there shooting guns, this is not a good way to be celebrating. I would not want this to happen to anyone else out there whether they are kids or grown ups. Please stop the shooting. This is not a good way to be celebrating. People would think the church is the safest place. We were actually sitting in church and my son got killed. So where else would you say you would be safe? I guess nowhere. Please stop. This is not a good thing.

ESSENCE.COM: How were you able to hold up when you went back to the sanctuary?
PETERS: My brother said, “Okay we are all going to church.” All of us would ride together on Sunday. He was like, “I am coming to pick you up.” I actually got up and got myself dressed and went to church. But when I really got to the door? That’s when it hit me. When I started thinking about what happened–that he was actually killed right there. I didn’t even look at the spot where it happened. I didn’t go anywhere close to the seat. I went straight to the front.  It really hit me when I saw all the kids with their moms and [my son] wasn’t with me. I really miss him.  I am not even going close to the area that it happened anymore. The memories are still there.

A prayer vigil for Marquel Peters is planned for 7 pm today at the Covington Drive Church of the Prophecy in Decatur.