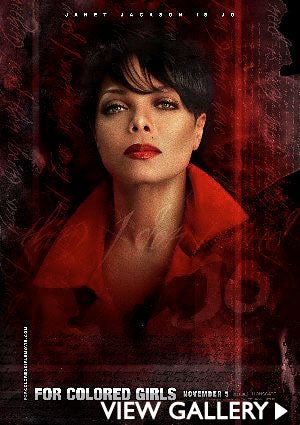 Posters for the highly anticipated Tyler Perry movie, “For Colored Girls” were recently released, and we have to admit — November 5 can’t come soon enough! Though the film adaptation’s synopsis is being kept top secret, each of the movie’s eight stars get their own teaser on the poster. Janet Jackson looks fierce in red, while Whoopi Goldberg — rumored to be playing God — is featured in all-white… Based on the 1975 stage play of the same name, the movie is also centered around the battles of eight women with love, domestic violence and abandonment. The film co-stars Anika Noni Rose, Phylicia Rashad, Kerry Washington, Thandie Newton, Loretta Devine, Kimberly Elise, Macy Gray, and Tessa Thompson.