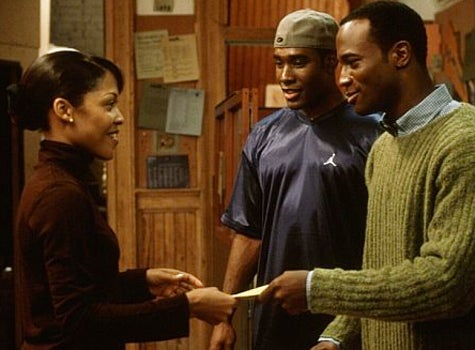 “You know, maybe if I had the luxury of getting my ass whooped, I could be calm right now. But I have been drinking tequila shots, my hormones are raging out of control, I’m emotional, I’m horny, and I don’t wanna hear about no goddamn peas!” Ha! What an unforgettable quote from Nia Long, as Jordan Armstrong, in 1999’s film ‘Best Man,’ staring Taye Diggs, Morris Chestnut, Monica Calhoun, and Sanaa Lathan.     As we reflect on the all the celebrity couples, Swizz and Alicia, TI and Tiny, Carmelo and LaLa, along with you all (check out Bridal Bliss) that have recently walked down the isle into martial bliss, 2010 has officially become the summer of love. With love floating freely in the air, there are a few things that capture the feeling of romance drifting around every corner, becoming a definite go-to just in case you feel like getting sentimental this summer.   One of which is the classic black film, ‘Best Man,’ probably one of the most refreshing cinematographic adaptations that showed depth, soul, and contradictions involved in Black love. Written and directed by Malcolm D. Lee, the comedic drama tells what can happen when fiction writers decide to tell the truth. In short, we remember following Haper (Taye Diggs) the lead character and narrator, to a wedding/reunion with five of his best ‘buppie’ friends from college. Harper, arrived fresh off having his first novel published on the eve of his best friend’s wedding. The problem is that much of the material in the book had been drawn from autobiographical sources – and as old friends gathered for the ceremony, the author and best man, had to face the fallout from some of the less than flattering portrayals contained in the book, particularly with groom Lance Sullivan (Morris Chestnut). The novel contained the revelations of a few well-guarded secrets, some of which effected and potentially ruined the relationships and the principles of which the wedding itself was built on.      Besides having a stellar ensemble cast, that just happened to be Black, all the characters, especially Terrence Howard who shined in the film, had very distinct personalities, yet believable connections. Thankfully this wasn’t your stereotypically labeled ‘Black film,’ released during that time period with street life, drug use, etc. Instead we were delivered a fun premise and portrayal of young, successful, intelligent Blacks, that were given a solid storyline that mixed comedy and heart warming messages.     Many of those messages were universal and not tied to color — friends, love, mistakes, and forgiveness. The film gave viewers romantically real views of how complicated love can be, but also the value of love. From Shelby (Harold Perineau) stranglehold relationship with an emasculating girlfriend (Melissa DeSousa), to the Quentin’s (Terrance Howard) eye opening argument regarding monogamy, to the on-going battle men and women face with fidelity and commitment.   As the summer quickly winds down, we can’t think of a better film to cuddle up the couch with boo on a hot summer night, and remember how much you originally enjoyed this film when you first viewed it over ten years ago. With the undeniable voice of reality heard throughout the entire 115 minutes, witty dialogue, a great R&B soundtrack, and most of all — the idealistic message real love conquers all, the ‘Best Man’ is an underrated gem worth dusting off and popping into the DVD player.