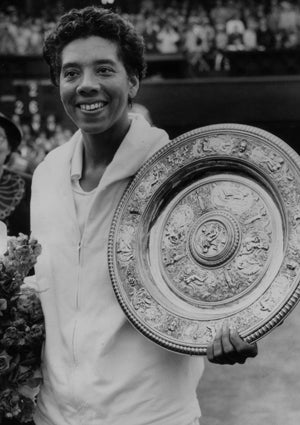 When 28-year-old Serena Williams lifted up her Wimbledon trophy this past week, the spirit of a young woman from Harlem some 53 years earlier also graced the South London stadium that day. That kindred spirit being none other than Althea Gibson, the first African-American tennis player to win the women’s singles title at Wimbledon in 1957. Daughter of a South Carolina sharecropper, her family moved north to New York where she grew up playing paddleball on the rough streets of Harlem, often getting into fights with neighborhood kids. A high school dropout, Gibson gained and lost jobs throughout her late teens, but it wasn’t until Blues musician Buddy Walker, who had worked for the city’s recreational department at the time, spotted her tennis skills and encouraged her to play the sport. In 1941, Gibson started taking lessons at the Harlem Cosmopolitan Tennis Club, and during the following year, she won her first tennis tournament sponsored by the American Tennis Association. Her tennis game improved and in 1946 two African-American physicians, Dr. Hubert Eaton and Dr. Walter Johnson, who later became a mentor for the late Arthur Ashe, persuaded Gibson to move to Wilmington, North Carolina, and finish high school. Despite her adjustments to living in the segregated South, Gibson won the first of her 10 straight ATA women’s singles national championships in 1947. Her tennis career skyrocketed while a student at Florida A&M University, from where she graduated in 1953 as a member of Alpha Kappa Alpha Sorority, Inc. Gibson later became the top-ranked U.S. player winning singles titles at both Wimbledon and the U.S. Championships in 1957 and 1958. She also became the first African-American woman to be named The Associated Press Female Athlete of the Year for both years. No other Black woman would win at Wimbledon until Venus Williams clenched her victory in 2000. Despite Gibson’s achievements as a tennis star, racial discrimination continued to exist. Travel and hotel accommodations were still segregated and money became scarce for her, since there were no endorsement deals for women in that era. So at the age of 31, Althea Gibson retired and decided to earn money through exhibition matches. Later in her career, Gibson’s health began to deteriorate and she suffered a stroke in 1992. In September of 2003, she died of respiratory failure at the age of 76. Through her perseverance and tennis accomplishments, Althea Gibson broke down racial barriers and opened doors for Arthur Ashe, Zina Garrison, as well as Venus and Serena Williams. The world of tennis may have lost a legend but her extraordinary legacy and unrelenting spirit as a trailblazer lives on.