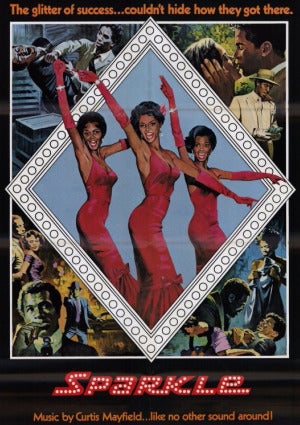 Three singing sisters. One aspiring songwriter. A corrupted business. Those were the main ingredients of “Sparkle.”  Released in the spring of 1976, the film made Irene Cara a star. She’d done a few episodes of “The Electric Company” and starred in the Gordon Parks, Jr. directed film, “Aaron Loves Angela,” but it was her turn in the title role of “Sparkle” that officially put Cara on the map. Raised in Harlem, Sparkle Williams and her siblings Sister (Lonette McKee) and Delores (Dwan Smith) sang in the church choir with two neighborhood guys named Stix (Philip Michael Thomas) and Levi (Dorian Harewood). Initially, everybody was on-board when Stix decided to form a quintet, but after Levi was recruited into a life of crime, the quintet became a quartet and later, a trio. That’s when “Sister & the Sisters” were born. The girls gigged on the local circuit, but just as their star was set to shine, things fell apart, slowly and painfully. For those of you who’ve not experienced the magic of “Sparkle,” we don’t want to give everything away. All we’ll say is that Sparkle found success and fame, but not without having to pay up on a hefty price-tag. Curtis Mayfield crafted one hell of a soundtrack and Aretha Franklin took it one step further when she sang the original songs for her album of the same name. “(Giving Him) Something He Can Feel” was the first single, and while Franklin did her thing (as did the ladies of En Vogue, who covered the song in 1991), we’ve got to give props to Sister, Sparkle and Delores who put it down in the film. And lest we forget to mention our other two favorites–“Hooked on Your Love” and “Look Into Your Heart.” It’s been over three decades since the film’s release, yet we still get chills just thinking about it. “Sparkle” was Black cinema at its best. Read More: