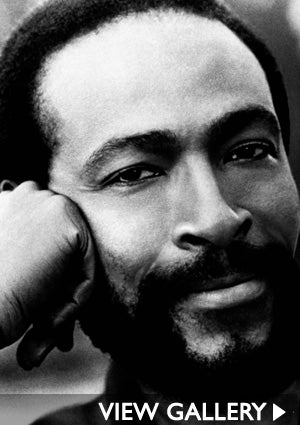 “Mother, mother There’s too many of you crying Brother, brother, brother There’s far too many of you dying You know we’ve got to find a way To bring some lovin’ here today Father, father We don’t need to escalate You see, war is not the answer For only love can conquer hate You know we’ve got to find a way To bring some lovin’ here today Picket lines and picket signs Don’t punish me with brutality Talk to me, so you can see What’s going on…” Marvin Gaye crafted those lyrics over three decades ago and ironically, his sentiments still ring true. It makes you wonder how we could possibly be in the same place, facing the same social dilemmas. He was definitely on to something… There are so many chapters of Gaye’s story that it’s difficult to know where to begin. There were so many hits–from “What’s Going On,” “I Heard It Through the Grapevine,” “Let’s Get It On” and “Got To Give It Up”–and so many moments. Whether you slow-danced to his music at basement parties, heard his voice bellow from your parent’s record player, or fell in love with his sound by way of a remastered compilation, it seems that we’ve all got a favorite Marvin Gaye song and a personal tale to go along with it. Long before he earned crossover success with his Grammy-winning single, “Sexual Healing,” Gaye, a native of Washington, D.C. was honing his musical talents in church. He later dabbled in a bit of doo-wop before finding his way to Motown Records, where he initially signed on as a session drummer. After scoring his first hit, “Stubborn Kind of Fellow,” in 1962, the ball really started rolling. What followed were more solo hits and collaborations with Tammi Terrell with whom he recorded “Ain’t Nothing Like the Real Thing” and “You’re All I Need to Get By.” It was after Turrell’s death in 1970 that Gaye’s music took a more reflective turn. During the decade that followed, he recorded some of his most memorable work, beginning with the 1971 concept album, “What’s Going On,” which included “Inner City Blues (Makes Me Wanna Holler)” and “Mercy Mercy Me (the Ecology).” Next up was the “Trouble Man” soundtrack in 1972 and a year later, he returned with the ultra-sexy collection, “Let’s Get It On,” led by the chart-topping title track. After teaming with Diana Ross for “Diana & Marvin” in 1973, Gaye went on to release “I Want You” (1976), “Live at The London Palladium” (1977) and “Here, My Dear” (1978) before leaving Motown. In 1982, he released “Midnight Love,” his first and only project  on Columbia Records and his final studio album. Though his music always spoke to us, the most remarkable quality about Marvin Gaye’s career was how he transitioned from a straight-laced pop singer to a socially-conscious, sensual balladeer to a mainstream success. Along the way, we learned that he, like the rest of us, was far from perfect. He battled drug addiction, endured two failed marriages and incurred hefty tax debts. Despite his troubles, there seemed to be a light at the end of the tunnel once he gained success with “Midnight Love.” Then on April 1, 1984, a day before his 45th birthday, the music stopped. His father was charged with his murder. Four years after his death, Gaye was inducted into the Rock & Roll Hall of Fame. Along with posthumous albums and a constant flood of compilations that bear his name and likeness, his songs have been sampled and covered by artists ranging from El and Chico DeBarge, Cyndi Lauper and Mary J. & Method Man to Keith Washington, Robin Thicke, Erick Sermon and Aaliyah, among them. In recent years, there’s even been chatter about a possible biopic, but nothing’s come to fruition, yet. We’ll just have to wait and see. As we honor the man and his music, we couldn’t leave you without sharing a clip of his now-classic rendition of “The Star-Spangled Banner” which he sang so beautifully at the 1983 NBA All-Star game. Nobody’s ever done it better. Read more: