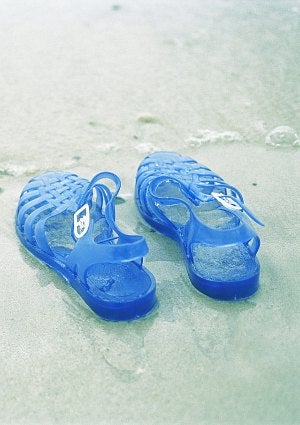 I’ll put money down that every Black girl has had them. Whether you were a big girl or young  when they were popular — if you didn’t have them, you definitely wanted them. The summertime shoe that got the name “Jellies” was probably one of the first fashion trends you ever followed. As soon as it was hot, you wasted no time stepping into that funny-looking plastic shoe, knowing that you were stylin’ way more than the girl at summer camp with the plain ol’ flip flops.  You never wanted to take them off, you would rock those jellies day in and day out until those bad boys went from clear to yellow. Unless, of course, you were the girl to have them in every color; the pink ones, the red ones or your neon orange glitter pair. Jellies became many girls’ first Louboutin — your first hot shoe sans the red bottom. Made of PVC plastic, jelly shoes came on the scene in the mid 1980s in a wide variety of brands and colors. Frequently infused with glitter, jellies got their name when referring to the semi-transparent materials that had a jelly-like sheen. The shoes found their way to America in 1981 when bank president Preston Haag Sr. quit his job and traveled to South America in search of potential products to sell in the US. While visiting Brazil he noticed plastic shoes worn by many young women in the area. Soon after inquiring about the manufacturer, Haag struck a deal to distribute the plastic shoes in the Southeastern US. The shoes were introduced during the 1982 World’s Fair, but jellies didn’t really make a statement until 1983 when Bloomingdale’s ordered 2,400 pairs in nine styles. They were later copied, knocked off and produced at an even lower price. By the late ’80s it wasn’t uncommon to buy jellies for only a dollar. When they made a comeback in the late ’90s and again in 2003, classic jellies were updated and modified and worn by more than young girls. Many of us remember when they added 2” inch heels to the plastic shoes, and we secretly bought a pair when we were way too old to still wear them. Some of us told ourselves the jelly ballet flats weren’t as childish as the original. Others bought every pair imaginable for our daughters and forced them to wear the shoes to any and every summer cookout. Even though our feet now perspire in the plastic a lot more than they did in the ’80s, we did our best to recapture the nostalgic moments rekindled by slipping our feet into those colorful shoes. To this day, jellies remain among the girliest of girlie accessories.