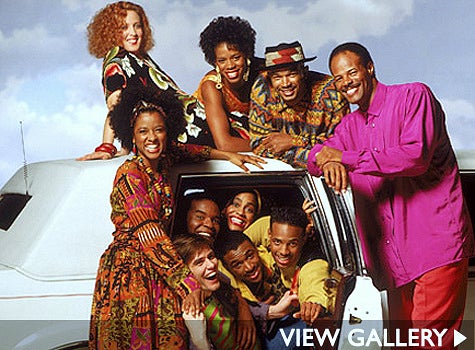 It seems like just yesterday that Homey D. Clown, Fire Marshall Bill and Wanda bumrushed their way into our living rooms on Sunday nights. Oh, and who can forget Benita Butrell, Cephus and Reesie or Men on Film’s resident cinema critics, Blaine Edwards and Antoine Merriweather? And what about all of those musical guests and the music video parodies? We think that Jim Carrey as Vanilla Ice, Ice Baby takes the top prize, hands down. “In Living Color” wasn’t just a half hour of random sketches. The Emmy-winning series was pure comedy with a dash of music and, of course, the always on-point Fly Girls who opened the show and danced us into commercial breaks. With his brother and sister, Damon and Kim, by his side and baby bro, Shawn as DJ SW1 on the wheels-of-steel, Keenen Ivory Wayans not only launched the careers of some of our favorite stars of today, but he also put his own spin on the variety show genre. It hasn’t been the same since. When “In Living Color” premiered in April 1990, we didn’t quite know what to expect, but in no time, we were hooked. Original cast members Jim Carrey, Kelly Coffield, Kim Coles, Tommy Davidson, David Alan Grier and T’Keyah Crystal Keymah were down for just about anything and always brought their A-game. They kept us in stitches most of the time. Other times, they had us clutching our pearls! Along with crafting the comedy, Keenen recruited Heavy D & the Boyz to record the theme song and Rosie Perez (now an Oscar-nominated actress) to choreograph The Fly Girls, including a then-unknown Jennifer Lopez. Then, of course, every hot musical artist of the day signed on to perform at the close of the show. The sketches were funny–the actors, even funnier–and over time, there was no doubt that the cast was entangled in a vicious game of tug-of-war with network censors. Actually, they seemed to enjoy pushing the envelope as far as they could. They were showing out because they knew the world was watching and laughing along. In television, as in life, nothing lasts forever and by the time the show came to an end after five seasons, the Wayans family was no longer a part of the fun. When the last episode aired in May 1994, “In Living Color,” which had since added Chris Rock to the cast, was barely recognizable. No matter, we’ll always treasure the good ol’ days. Word is that many of the musical performances and some of the edgier (translation: uber-offensive, yet hilarious!) sketches somehow didn’t make the final edit for DVD or syndication…hmmm. “In Living Color” is still worthy of a second, or third, look and even after all these years, the show is still funny. If you’re around on Saturday morning, be sure to check out a handful of back-to-back episodes on BET and see for yourself. Read more: