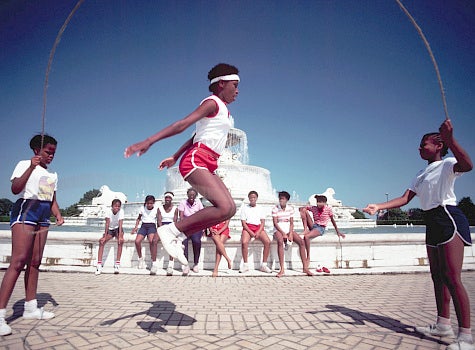 You had already mastered skipping rope solo, but jumping in a single rope had you and your two friends bored. And really, seeing all the older girls jumping Double Dutch made you want to be a “big girl” too. Little did you know that when you made up your mind to push yourself in those two white clotheslines flipping back and forth, the legendary game of Double Dutch would carry you through your most impressionable years and become the game that would bond you to many other young Black girls across the nation. Brought to New York City by Dutch settlers, back when the area was still called New Amsterdam (in or around the late 1800s or very early 1900s), the English later dubbed the rope game “Double Dutch.” The exercise, which involved three players and two ropes, grew tremendously over the years and became a favorite pastime among young girls in urban areas — especially in New York. And for more than a century, it has given everyone — from the chicas in your crew to professional competitors — something to jump up and down about. All that jumping isn’t easy either, getting and staying inside those two ropes while they are being turned in an eggbeater fashion was more than an game — it was a challenge. As your two homegirls, called your “turners,” would spin the rope, they anticipated the tricks and gymnastics you would do once you 1,2,3’d yourself inside. Sometimes you were successful, and you made it through the entire songs like, “Ice cream, ice cream / Cherry on top / How many boyfriends does (NAME) got / 1, 2, 3, 4…,” while girls on the sidelines cheered you on or watched with envy. Other times you weren’t as successful, either tripping up trying to shine, or blaming it on your “double-handed” turner who couldn’t quite getting the 1, 2 turning rhythm of the rope correct. Either way it didn’t matter, little ladies in neighborhoods everywhere would play hours on end, or until you popped your red, white, and blue rope. It was David A. Walker’s bright idea in 1973, to develop the street game of Double Dutch into the World Class Sport that it is today. With the assistance of the physical education instructors at IS 10, Walker and his partner, Ulysess Williams, refreshed the game by developing it into a competitive team sport. On February 14, 1974, the first Double Dutch tournament was held with nearly 600 fifth, sixth, seventh and eight grade students participating. Since that first tournament, competitive Double Dutch has expanded with citywide and national championships. Nearly 100,000 girls and boys representing schools and community centers, both nationally and internationally compete for team positions at Double Dutch’s most prestigious events. Although the game has lost some of its popularity as a street game, you can still find both young and older women alike getting their “footsie” and “hops” at summertime cookouts or neighborhood block parties. We salute all the Harlem dames that seemed to be the savviest in the rope, and all the country girls who picked up the game after visiting cousins on the east coast, every girl who never wanted to be a turner, but always wanted to jump, every double dutch crew full of girls in training bras who tried to represent for their block. We remember double dutch, the game that introduced many of us to our best friends, and kept us occupied till the street lights came on.