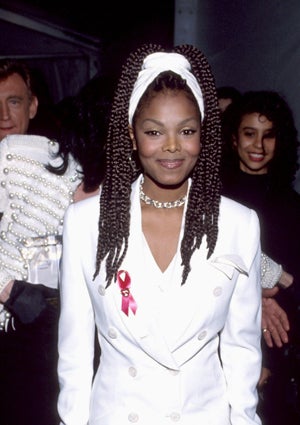 Before Jennifer Aniston made that bouncy layered haircut called the  ‘Rachel’ popular on the show ‘Friends,’ Black women were buzzing about a hair trend Janet Jackson set in 1993 when she rocked her insanely long box braids in the film “Poetic Justice.” You remember how fly you thought Janet was with her newsboy hat flipped to the back covering the top of the chunky individual braids that fell down her back.  Whether you called them box braids, kassamas braids, plaits, or dookie braids, you had to have them in your own head. Although Janet gave the box braid hairstyle notoriety, the origins of the hair form can be traced back to Egypt as far as 3500 B.C. Years later each region of Africa had its own traditional styles. In many West African countries, hair braiding developed into complex patterns signaling one’s social status, age group, and village affiliation. Certain elaborate hair treatments were reserved for ceremonial occasions like weddings and others rites of passage. From box braids “roots” in Africa to now, not much has changed. When the popularity of box braids was at its height, it was a hairstyle we forced our sisters, mothers, grandmothers, or aunts to learn and attempt to do. Part your hair in box shaped part, drape the synthetic hair over your natural hair and separate into three parts, tightly crossing over and overlapping the three natural hair and synthetic pieces into a braid to the end. Repeat. Although the process wasn’t extremely difficult once you got into a rhythm, getting this style was all in day’s work — literally.  Many of us remember sitting between our older cousin’s legs on two pillows, or in the uncomfortable salon chair at our local salons for more than six to eight hours just to achieve the the look. With packs and packs of $1.39 Kanekalon synthetic hair on deck, we got our hair pulled, twisted, and turned until we had individual braids sprouting out of or heads.  Of course for some of us the braids alone weren’t enough. Nope, we would add rollers to the ends, dipping our braids in hot water to achieve curls. Others added beads and hair ornaments to give their braids more flair. Then there were some of us who, like Janet, would pull down our baby hairs and grab the brown gel to smooth out our edges. Whichever way we tried to remix the box braid style, we knew we were the bomb, and no one could tell us anything. If you think about it, box braids were the first acceptable hair extension process, when getting weaves were still taboo. We knew Black men would tease us about having a horse-hair weave, but would never talk bad about our braids.  So we put them in our heads, took them out washed our hair, and put them right back in. Now that we live in a world where weaves reigns supreme, and human hair micro-braids beat out any type of braids that use synthetic hair, box braids are seen less and less on the heads of Black women. Some of us may bring the individual braids back for vacations, or when our hairstylists tell us we need to give the curling iron a break. You can still catch ladies using box braids to assist in growing out permed hair when finally making the decision to go natural. In the end, Janet’s inspired locks are less popular now amongst our age group, but even in 2010 we have to acknowledge it was a hairstyle that did many of us ‘justice.’