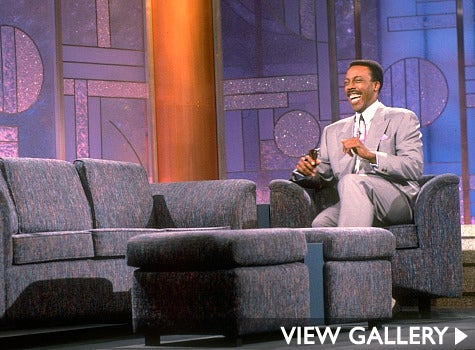 “The Arsenio Hall Show” was the place to be during the early 90s. To call it just a show is an understatement. It was a celebration. It was a cultural phenomenon, one which we’ve yet to experience again since the late-night talkfest ended its five-year run on May 27, 1994. Back then, there were few outlets for Black talent to shine, hence the hour-long show filled that void. Where else could we see New Edition hit the stage on one night, Prince on the next, followed by Bobby Brown, Shabba Ranks, N.W.A. and Whitney Houston? Nowhere. And let’s not forget the night that President Bill Clinton (who was then, the Governor of Arkansas) stopped by to chat and play the sax. Long before he was a fixture in our living rooms every night, Cleveland-born Hall was making the Hollywood rounds. Not only was he gaining momentum as a stand-up comedian, he also had a tight circle of celebrity friends including Eddie Murphy, Magic Johnson, MC Hammer and then-star-on-the-rise, Paula Abdul, who was rumored to be more than just a friend. In fact, the buzz around him was so loud that when a replacement host was needed for “The Late Show,” the Fox network brass called upon Hall, who came in for a contracted 13-week run and shut it down. The stage was set and we couldn’t wait to see what he’d come with next.   By the time “The Arsenio Hall Show” premiered on January 3, 1989, Hall was officially a household name. Six months prior, he’d co-starred with Murphy in the monster hit, “Coming to America” and everybody wanted to join his party…and he was happy to welcome them to his new home at Stage 29 at Paramount Studios. Between shouting out his executive producer, Sandy, “woofing” with the dog pound or sharing his “things that make you go hmmm…” musings, Hall used his wide net of connections to lure in a virtual who’s-who of 90s talent–from Tupac, TLC and De La Soul to Vanessa Williams, Bill Cosby, Salt n’ Pepa and every actor, singer and hip-hop, R&B and pop artist in-between. By the time the King of Pop came through for a surprise visit, the Emmy-winning show was a ratings bonanza. Everybody was tuned in. Until this day, nobody really knows why the show came to an end. Some speculate that it was simply time to sign off. Better to go out while you’re at the top of your game, right? Others contend that Louis Farrakhan’s controversial appearance on the couch was the network’s signal to pull the plug. Either way, no one can never deny that “The Arsenio Hall Show” made television history. Though it’s been 16 years since he signed off, we’ve still got to give credit where credit is due. Arsenio, you did your thing, shiny suits and all. Read more: