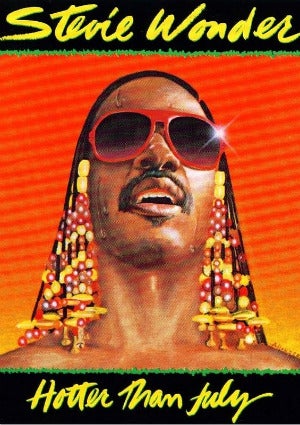 On September 30 years ago, a Motown pop machine by the name of Steve Wonder released a major studio album that propelled him to commercial success. The release of the album turned up the heat, so much so Steve Wonder appropriately titled his ninth body of work, “Hotter Than July.” The name said it all, and in matter of weeks Wonder went from gifted songwriter and phenomenal instrumentalist to a iconic superstar.  So how hot was it? ‘Hotter than July,’ was so hot that despite the critical acclaim of albums, ‘Songs in the Key of Life,’ and ‘Inversions,’ the album, it was Wonder’s first to reach platinum selling status. Inspired by a meeting with the legendary reggae artist Bob Marley in 1979, “Master Blaster (Jammin’),” was created and released as the first single. The song, which described Wonder’s anti-war sentiments, reached #5 on the Billboard charts. “All I do” became a tribute song of sorts, to Marley who passed away seven months after its release. Not only did the album introduce Wonder’s new sound and feel of music, it also made a huge political impact worldwide. His rendition of ‘Happy Birthday,’ has become a mainstay at many Black birthday celebrations, though it was originally created to serve as a vehicle for a campaign to establish Dr. Martin Luther King’s birthday as a national holiday. Not only did Wonder create the single to honor the man, he also included the design of the album sleeve (one side a black and white photo of King with a message from Wonder, the other side five historical photos of the turbulent times during the Civil Rights movement) to further push his campaign in making January 15 a nationally recognized day. After a criminally long delay, President Regan signed the observation of the day law three years later. Wonder used “Hotter…” to introduce and educate his audience with different types of music. The song, ‘I Ain’t Going to Stand For It,’ became the second single and infused the inclusion of country elements creating an impressive track, that surprisingly reached #11 on the R&B charts. The album also served as a body of work for future artists to appreciate and use. “All I Do” was remade into a techno dance song by the British group, The Cleptomanics in 2001 featuring Bryan Chambers. In 2001 as well, superstar Eric Clapton covered “I Ain’t Going to Stand For It,’ and ironically enough back in July of 1993, the all star R&B group Jodeci decided to take Stevie Wonder original version of ‘Lately,’ and immortalize it by doing their own rendition. Flashing back, “Hotter Than July” was a solid set of ten songs where Stevie showcased his eclecticism, but still allowed everything to fit together. The album release was right on time in September 1980 as the summer wound down. Listening to the musical fire Wonder brought to his work most wouldn’t mind it being hotter than July right now.