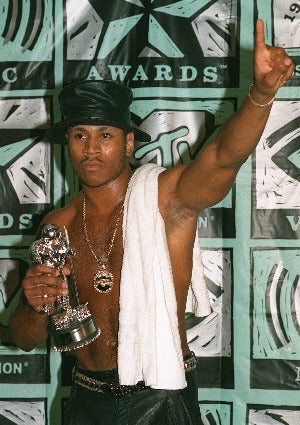 In 1990 even the most conservative of girls wanted to be an around the way girl. Why? Because LL Cool J made it clear that that was what he wanted — extensions in her hair and bamboo earrings, at least two pairs, a Fendi bag and a bad attitude… We rushed out and bought doorknockers and rocked biking shorts as regularly as jeans. LL went from a Kangol wearing rap pioneer who crooned about needing love in his early days, to a lip-licking, bicep bulging, sex symbol who knew exactly what he wanted in a woman, and as his name suggests, the ladies loved it. Those ripped abs, that adorable smile, those intense eyes — and that talent. This man was clearly gifted and tracks like “The Booming System” and “Jingling baby” were everywhere. In the cars passing by, at the club, at the house party — everywhere. And his videos — remember music videos? — were on constant rotation because everyone could get down to those funky beats. “Around the Way Girl,” “Milky Cereal,” and the title track showed growth for LL as an MC. This album proved to be a classic for many reasons, the most important was that it was fun. It spoke volumes about what was happening back then and how, no matter the weather, there’s always some room for a little fun. Even the hard rhythm of the album title track had a “wink-wink” moment with the title itself “Mama Said Knock You Out.” Mama said what?! Now 42, the rapper and actor still has the banging body of twenty-something and while many of his counterparts have let their age settle around their waistlines, LL has managed to maintain his sexy six pack. Lord have mercy! Since popping onto the music scene 25 years ago, LL has released twelve albums, a greatest hits compilation, and is currently flexing his muscle as Special Agent Sam Hanna on the crime drama “NCIS: Los Angeles.” All these years later, we can’t get enough of the sultry star that ladies can’t help but love.