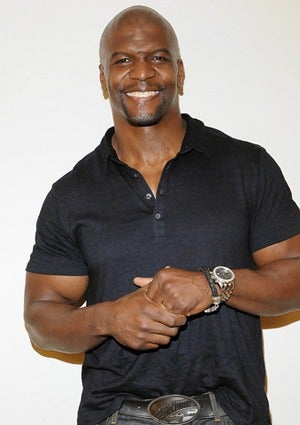 The hit TBS sitcom “Are We There Yet?” — starring Terry Crews and Essence Atkins — is back to show us more blended family drama. Crews knows firsthand how difficult it can be, and he opened up about how closely the show mimics his own life. He revealed that this season he and Atkins are moving out of the honeymoon phase and on to the issues that really get under each other’s skin.

ESSENCE.com caught up with Crews to talk about what the new season will bring, how closely the show resembles his life, and oddly enough, why he likes Justin Bieber so much…

ESSENCE.com: What did you think of the first season of “Are We There Yet?”
TERRY CREWS: I thought we had a good start, I was really happy with the tone and with what we wanted to establish. This thing is new and we put together this many episodes in this amount of time — in network quality. That’s the one thing everyone was concerned about was “were we going to be able to do it?” I think we more than prove that this was possible. What I find with sitcoms is that after you do the first 10 episodes you find your rhythm, you find your groove and and I can honestly say we’re in that. We’re batting at 1,000. It’s going to be an improved show from the first time. You get to get to know the characters more. Jokes that got established in the first season are getting fleshed out even more and we’ve been having a lot of fun and we think that people are going notice a difference.

ESSENCE.com: What can we expect this season?
CREWS: This season is going to be a little wilder. It’s like any marriage, we were newlyweds, we were getting ourselves together. Now, all the idiosyncrasies are coming out. The things that really irritate me about Suzanne are coming out and the things that really irriatate Suzanne about are starting to come out. We’re doing lot less with the “Hey baby, how are you doing today” and more of the “why did you do that?” We’re cutting to the chase a lot quicker. Now we can just be funny and that’s the big difference.

ESSENCE.com: In what ways was does the show mimic your own life?
CREWS: A lot ways. I married my wife when she was a single mom with a little girl. It’s all about a blended family. When I met her 23 years ago, we got married when the baby was two, now she’s 24 with her own baby. So I know what it’s like to marry into a family when the kids don’t like you, because that little baby did not like me. My oldest wanted nothing to do with me. It’s kind of a thankless job, there’s so many ways do it wrong but there’s only one way to do it right.

ESSENCE.com: Are there going to be any guest stars this season?
CREWS: Oh we have a ton of guest stars. We have Michael Strahan, Laila Ali, Sinbad, Little JJ, Wayne Brady, Michael Blackson, Pepa — just every week we have new and great people that want to be involved. Deion Sanders is coming on a little bit too. With every new guest it’s a great great thing. Black Hollywood is like a family reunion — we’re having a ball.

ESSENCE.com: We hear you love Justin Bieber, what’s that about?
CREWS: Justin is my man! Let me tell you why I love him. First of all, he came through the Kids Choice awards (last year) and no one knew who he was. He came over to me and was like, “Hey Mr. Cruz, how are you doing. I’m a fan. My name is Justin Bieber and I’m signed to Usher’s label.” He was the most polite, just honorable young man. I was like ‘wow!’ He introduced himself to me like I would want my kids to introduce themselves to anybody. Fast forward to the next year, I went to the same Kids Choice Awards and I hear all this screaming and hollering and I’m thinking it’s for me. I turn around and I’m thinking ‘I really blew up over the year’ and it was for Justin Bieber! These kids lost their minds. What a difference a year makes. I’m a Bieber fan for life.