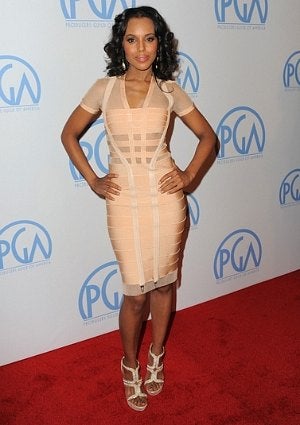 Kerry Washington holds nothing back when it comes to her craft. In her latest film, “Night Catches Us,” the Bronx native leaps into the story of the Black Panther movement, playing a single mother struggling with her radical past and beliefs.

Washington spoke with ESSENCE.com about her role in the film, and rocking the ’70s fashion and hair on set.

ESSENCE.com: How did you get involved with “Night Catches Us”?
KERRY WASHINGTON: To be totally honest, I had the script many, many years ago and there was another actress attached to the role but I fell in love with the project. The film was going into production but it kept getting pushed back and I don’t remember why — I don’t know if it was financing or what — but essentially, the other lead actress fell through. So in the end, it boiled down to being who it was going to be. I’m a firm believer that nothing happens by accident and everything happens for reasons so I was able to do the role.

ESSENCE.com: In the film you play Patricia, a single mom reconciling with her radical past. How did you go about approaching the part, especially at the last minute?
WASHINGTON: I actually took a course in high school called “Literature of the Civil Rights Movement” and I was able to read The Biography of Malcolm X and other African-American writers of the time. I was really able to read the spectrum of contributing voices to the movement. At the age of 14 and 15, I was having educational dialogue about the difference between Martin and Malcolm so the Panther movement wasn’t uncharted territory for me.

ESSENCE.com: What’s one thing you hope audiences will understand about the Panther party and movement after seeing the film?
WASHINGTON: If you wanted to watch a movie about the life of the Bronte sisters, you have a dozen movies you can turn to. We just don’t have that luxury as people of color when we watch historical fiction so it’s important i think for us to remember to tell our stories because it allows for a diversity of perspectives. One of the things I really love about the film is that even though it takes place in the Black Panther movement, it’s not really about the Black Panther movement. It’s about human questions of how do you parent well? The film makes it clear that every movement is filled with people, with human beings and the more we remember that, the better off we’ll be.

ESSENCE.com: When you were playing Patricia, was there anything about your character you felt really connected to?
WASHINGTON: That’s funny. I always have to look for that when I’m playing a character but to be totally honest, I did something I had never done before with Patricia. I related to her because she reminded me so much of my mother. While she wasn’t a member of the Black Panther she was such a socially active and political person. She’s a retired teacher so she was very active in the community, kind of like this maternal figure in our family. The second time my mother saw the film she pulled me aside and said, ‘Are you doing me?’ [laughs] I was like ‘Yea, I wasn’t sure if you would notice. I thought I would get away with it!’

ESSENCE.com: The film was set in 1976, did you have fun rocking the ’70s fashion and hair on set?
WASHINGTON: I really did. it was fun because in a way it was like the film almost took off where “Ray” and “Last King of Scotland” ended. It was fun — I remember calling my mother one day and saying, ‘I don’t know how you made it the whole summer in polyester.’ That fabric does not breathe!