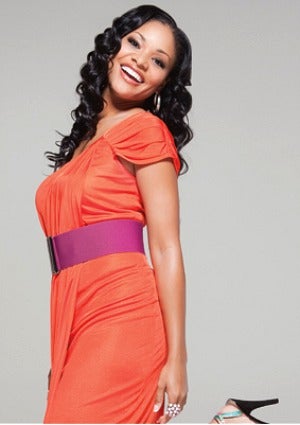 Formal training, roles in television series like “Lincoln Heights” and a lot of hard work paved the way for the exciting role Erica says she’s most proud of. And it’s likely “Let’s Stay Together,” (and the acquisition of “The Game”) are the proudest moments for BET as well.

ESSENCE.com: Tell us about your character on “Let’s Stay Together.”
ERICA HUBBARD: I play Kita Whitmore, a 24-year-old single, fun-loving and sassy, outspoken girl who loves fashion. She loves giving advice, even when people don’t ask for it. And she works at the DMV.

ESSENCE.com: What will make this show relatable to Black women?
HUBBARD: Oh my goodness, we have all different personalities portrayed in the show. People want to see themselves or something they can relate to on screen. We have an ensemble cast of five different characters: an attorney, contractor, pediatrician, stay-at-home mom and my character, who works at the DMV. We give something that we think our community can relate to.

ESSENCE.com: One of the characters on the show is a pediatrician who is engaged. Do you think it’s possible for a Black woman to have it all — the successful career and the functional, healthy marriage?
HUBBARD: Yes, that’s what the show sheds light on. You could be a pediatrician or stay-at-home mom and make both situations work. Of course there will be conflicts — who doesn’t have them? — but it’s all about pulling yourself together and making it work. And even with Kita, who is single and looking for a relationship, you can make that lifestyle work too. But you have to keep a positive outlook, no matter the lifestyle.

ESSENCE.com: What kind of roles are you interested in pursuing in the future?
HUBBARD: I would love to be in a horror film or something dramatic. Something where I’m going through turmoil. I like to keep reinventing myself and playing different parts. I have a theater background, so in school we’re trained to jump into a bunch of different roles. Cassie [the character I played] in “Lincoln Heights” is so different from Kita. I want to transform.

ESSENCE.com: You also have an organization, The Erica Hubbard Foundation, which motivates at risk inner city kids. Why did you choose this platform?
HUBBARD: I come from a community that has things like drugs, molestation and gangsters. I know my life story could’ve been different if I didn’t have the right people in my life. So it’s important for me to tell these kids, ‘You can be a success story. Look at me. People need people to encourage them.

Catch Erica Hubbard on the series premier of “Let’s Stay Together” on BET, tonight at 11pm.