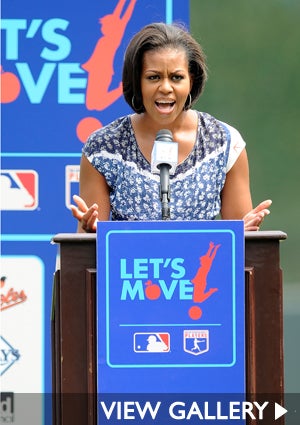 A key pillar of First Lady Michelle Obama’s “Let’s Move” childhood obesity campaign–serving healthier foods in schools–gained major traction on Thursday. The U.S. Senate passed the “Healthy, Hunger-Free Kids Act,” which will give millions more children access to healthier meals by creating new nutrition standards for all foods served in public schools. “I am thrilled that Congress has taken a major step forward today in passing the Child Nutrition bill,” Mrs. Obama, who is on vacation in Spain with daughter Sasha, said in a statement. “While childhood obesity cannot be solved overnight, with everyone working together, there’s no question that it can be solved–and today’s vote moves us one step closer to reaching that goal.” The House version of the bill, which has garnered wide bipartisan support, is still pending. But if passed, it doesn’t mean that kids will be served tofu and bean sprouts–as a small minority of critics, alarmed by the bill’s modest federal spending of $4.5 billion over 10 years, have tried to claim. Instead the new standards require familiar kids’ food like pizza and chicken tenders to be made with healthier ingredients, and supplemented with fruits and vegetables. The bill also allows more low-income children to be eligible for free and discounted meals. This component is especially vital for many poor children who both rely on school meals as a primary source of nutrition, and who have been hit hardest by the obesity crisis due to high-fat, low-cost fare in their communities. Here’s hoping that the House follows suit and sends the bill to President Obama’s desk next! For more of Cynthia Gordy‘s Obama Watch stories, click here.