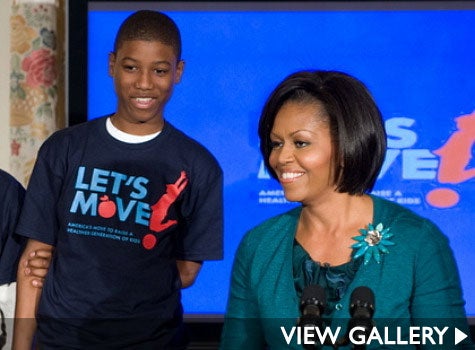 Since she first moved into the White House, First Lady Michelle Obama’s advocacy around childhood obesity has been well documented–planting and harvesting a vegetable garden with children to talk about healthy eating, for example, and hosting activities with professional athletes and kids on the White House lawn. But on Tuesday she unveiled a comprehensive campaign to sharply drive her message around the country. From the White House, Mrs. Obama announced “Let’s Move,” a national campaign targeting multiple dimensions of the childhood obesity problem. “Childhood obesity has became an epidemic, we all know it,” said the event emcee, former NFL player and NBC correspondent Tiki Barber. “But somehow change has not come.” With the backing of Cabinet officials and other private and public partnerships, the First Lady hopes to end childhood obesity in a generation. Some of the goals Mrs. Obama outlined for “Let’s Move” are:   1. Helping Families Make Better Choices To empower consumers, the Food and Drug Administration will work with manufacturers to create easier to understand, front-of-package food labeling. The American Academy of Pediatrics will ensure that doctors and nurses regularly monitor kids’ BMI and have them write actual prescriptions for parents with simple solutions for increasing healthy eating and physical activity. And major media companies, including NBC, Viacom and the Walt Disney Co. have committed to promote the campaign through public service announcements, programming and marketing.   2. Accessing Healthy, Affordable Food Acknowledging the systemic reasons behind the poor diets of some Americans, the Obama Administration has proposed investing $400 million for bringing grocery stores to underserved areas–or “food deserts,” inner city neighborhoods where access to fresh, quality food is limited. The USDA also unveiled a new Food Environment Atlas, a map of the country that charts food deserts, along with the rates of food-related problems like diabetes and obesity, to be used by government, educators and businesses to create change across the nation.   3. Serving Healthier Foods in Schools Pointing out that many children get as many as half of their daily calories at school, Mrs. Obama announced that President Obama has proposed spending an extra $10 billion over the next ten years to improve the National School Lunch and Breakfast programs. The First Lady also called for doubling the amount of schools in the HealthierUS School Challenge, which awards schools that serve healthy lunches and give kids exercise opportunities. School food suppliers, including Sodexho and Aramark, have already committed to decrease sugar, fat and salt; increase whole grains; and double the fresh produce in their school meals.   4. Increasing Physical Activity Experts recommend that kids get 60 minutes of active play each day, yet the average American child spends 7.5 hours watching TV, playing video games and using the computer. Mrs. Obama said that the President’s Physical Fitness Challenge (remember having to climb a rope, and do chin-ups for that in gym class?) will be modernized and expanded, so that it’s not only focused on how athletic children are, but how active. The President will also award children with a “Presidential Active Lifestyle Award” for meeting the challenge of physical activity five days a week, for six weeks.   “I’ve spoken with many experts about this issue, and not a single one has said that the solution is to have government tell people what to do,” Mrs. Obama said. “Instead, I’m talking about what we can do. I’m talking about commonsense steps we can take in our families and communities to help our kids lead active, healthy lives.”   For more information on the First Lady’s initiative, visit LetsMove.gov. Read more: