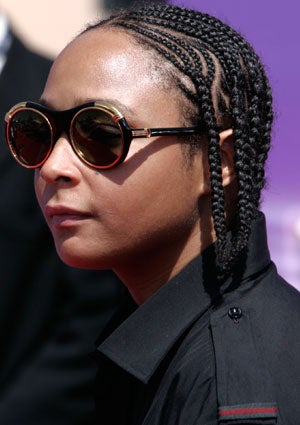 Felicia ‘Snoop’ Pearson of HBO’s “The Wire” was jailed and charged with allegedly conspiring with two men to distribute heroin and aiding and abetting, according to the Huffington Post. Her attorney says she’s shocked.

The young actress is being held without bond as her attorney, Paul Gardner, is prepping to file a writ of habeas corpus and ask for bail review on Monday. She’s just one of 64 people caught up in a large scale state and federal drug bust. Investigators claim she’s part of an east Baltimore gang who allegedly purchased heroin from New York and marijuana from California to be sold in her hometown.

In last week’s court proceedings a judge mentioned that there’s audio evidence of Pearson putting up cash to fund the operation. However, Pearson disputes that claim and maintains she doesn’t sell drugs.

“I’m not sure where this money is supposed to come from. She’s not particularly blessed with deep pockets at this point,” said Gardner.

We’ll be watching the courtroom drama unfold as investigators get to the bottom of this.