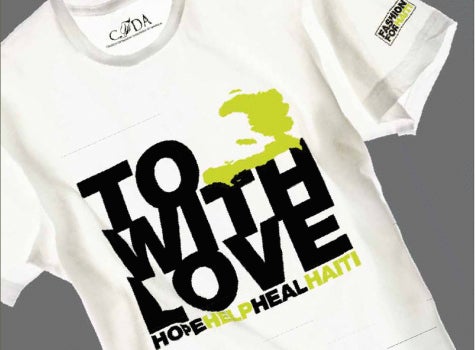 The Council of Fashion Designers of America is proving to the world that the fashion industry has big a heart that extends beyond the runways. In response to the devastation that has hit Haiti following the earthquake on January 12, industry leaders have organized a fund raising effort to raise money for the people of Haiti. On February 12th, the CFDA will launch a “Fashion for Haiti” T-shirt ($25) with all proceeds benefiting the Clinton Bush Haiti Fund. “The tragedy in Haiti has affected everyone and most of us individually have given money for relief,” said Diane von Furstenberg, President of the Council of Fashion Designers of America. “However, I think it is now important to send a message and create a channel for funding from fashion as an industry.” The CFDA’s gotten a little help from Beyonce who’s been named as the face of the limited-edition t-shirts. Other fashion insiders endorsing the “Fashion For Haiti” campaign include Tory Burch, Francisco Costa, Oscar de la Renta, Tommy Hilfiger, Donna Karan, Ralph Lauren, Andrew Rosen, Diane von Furstenberg, Vera Wang and Anna Wintour among many others. The “Fashion for Haiti” T-shirt , manufactured by Theory, is designed by Peter Arnell who created a mended-heart logo T-shirt for the CFDA following September 11th which raised $2 million for the Twin Towers Fund. Say you care with style and pick up a T-shirt at retailers nationwide as well as online at www.cfda.com. Read More: