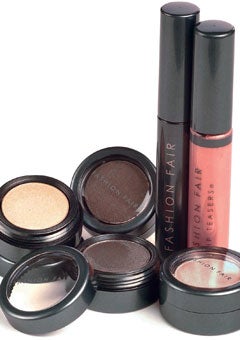 If you haven’t seen ‘Jumping the Broom’ starring Paula Patton and Laz Alonso, what are you waiting for? The blockbuster romantic comedy garnered rave reviews for a reason — the cast is heaven-sent, the performances are genius and the story is downright delightful. And now, cosmetics giant Fashion Fair has capitalized off the film’s stunning success, partnering with Sony Pictures to release a six item ‘Jumping the Broom’ collection.

Sold exclusively at Macy’s, the limited edition line includes a lip gloss, mascara and four eyeshadows. “The collection is a great way to speak to a younger audience,” Muriel Gonzalez, Macy’s executive VP told WWD in an exclusive interview. “To see it worn on such influential stars as Angela Bassett is a testament to the brand’s appeal.”