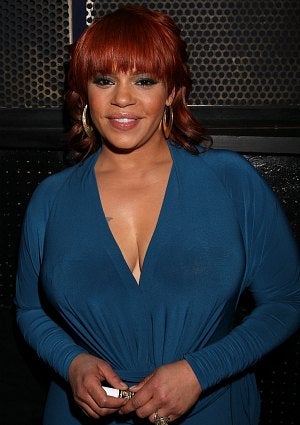 Faith Evans’ DUI drama has come to a quiet end after the singer pleaded no contest to one misdemeanor count of reckless driving involving alcohol. Evans was arrested this past summer on suspicion of drunk driving after being stopped at a DUI checkpoint. For her plea, the Grammy-winning widow of Notorious B.I.G. will have to serve three years informal probation and cannot drive with any alcohol in her system, reports TMZ. She’ll also have to pay a $300 fine and enter an alcohol treatment program… It’s not the first time “Faye” has had a brush with the law. In 2004 she and her current husband were found in possession of marijuana and cocaine and had to enter a drug-abuse intervention program. On a more positive note, the 37-year-old mom of four is slated to play Florence Ballard, the original lead singer of the Supremes, in an upcoming biopic. Let’s hope Faye, like her 2005 song, won’t soon let issues with the law get in her way “Again.”
Loading the player...