By clicking Sign Up, you agree to our Terms of Use and that you have read our Privacy Policy
Skip to content
By Yolanda Sangweni · Updated October 28, 2020
Racquel Bailey is ready for her big break in Hollywood, and Tyler Perry better heed her call.

The 23-year-old New Jersey single mom spent her last paycheck to pay for an ad with the message: “Let me be your next leading lady,” on a billboard two miles away from Perry’s Atlanta film studio. Since then, she’s gotten lots of applause for her boldness, but still no call from Tyler Perry.

She spoke with ESSENCE.com about why she loves Tyler Perry, her dreams of winning an Oscar, and the Hollywood actors who inspire her.
ESSENCE.com: First of all, you’re a brave woman for putting up a billboard of yourself trying to get an acting gig from Tyler Perry. Tell us about it.
RACQUEL BAILEY: I wanted Tyler Perry to see me. These directors get hundreds of head shots everyday, so what sets me apart? I constantly send out head shots and go to auditions where I’m told, “You’re fantastic,” but then I don’t get the role. So I’m like, “What’s happening here?” This business is all about who you know, and I just got tired of putting my fate in everybody else’s hands.

ESSENCE.com: How did you end up putting up a billboard?
RACQUEL: I called up the ad company and they asked, “What do you want to market?” And I said, “Myself.” They laughed, and asked again. Then I gave them the whole story and they said, “Wow, that’s excellent.” 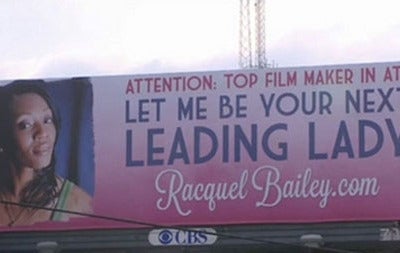 ESSENCE.com: There are a lot of directors. Why target him?
RACQUEL: I’m very inspired by his work. He gives African-American actresses a chance in this industry, and I wanted to work with him.

ESSENCE.com: Tyler Perry is one of those polarizing celebrities; lots of people love him, but he also gets a lot of flak from some who accuse him of creating stereotypical characters. What are your thoughts?
RACQUEL: Well, the actors are working, first of all, which is quite difficult when you’re an African-American actor or actress. There are few leading roles out there knocking on your front door. Tyler Perry gives people the opportunity to work, and most actors want work. He talks very spiritually about his work, and that’s all that I’m focused on.

ESSENCE.com: So what are you working on right now before your big break?
RACQUEL: I’ve been doing classical theater all my life and recently decided to get into television and film. I’m currently working on some independent films and commercials to promote me in the direction that I want to be in, which is to win the Academy Award one day.

ESSENCE.com: Whose acting career would you like to emulate?
RACQUEL: I find Meryl Streep’s body of work amazing. Being the female Denzel Washington would be great. I think the way he approaches his craft and embodies his characters is phenomenal. Angela Bassett and Julia Roberts are also favorites.

ESSENCE.com: You spent your last your last $1,500 on the billboard?
RACQUEL: Yes, I did. I started a theater company a few years ago and we were hired by Newark public schools to teach ballet in after-school programs. The summertime is coming up, and the program is drawing to an end. So that $1,500 was my last paycheck.

ESSENCE.com: Well, good luck, sister.
RACQUEL: Thanks, I need it. I’m taking my family down to Atlanta to go and see the billboard.

Watch Racquel’s reel and let us know what you think: