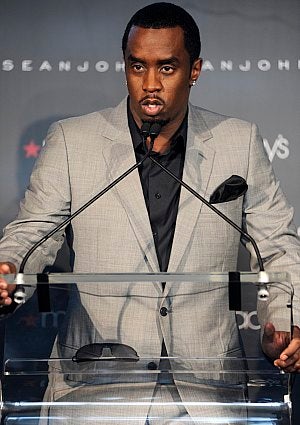 This morning, Sean “Diddy” Combs held a press conference in New York City announcing a new retail deal he inked with Macy’s department stores. As of spring 2011, his Sean John line will be sold exclusively at the famed retailer. Standing alongside Terry Lundgren, Chairman, President and CEO of Macy’s, Combs said, “I am overwhelmed and humbled by the recognition from such an iconic American retailer as Macy’s and we’re astounded by the opportunity that this exclusive deal gives the Sean John brand and all of our licensing partners. When I launched the Sean John brand over 11 years ago, we created the tag line ‘The Future of Fashion’ and today, as we are announcing this partnership, I truly believe the future has arrived.” Combs told ESSENCE.com, “When I was 16 one of my first jobs was at Macy’s so signing this deal makes me feel like I’ve come full circle.” Macy’s has been had much success with their exclusive Rachel Rachel Roy line with designer/socialite, Rachel Roy. While Roy merely offers her lower-priced line, Macy’s will offer everything under the Sean John brand, from high to low. They stand to make a lot more money through this deal. Consider this the real-life version of the Billion Dollar Remix record he appeared on last year. Music icon and producer Sean “Diddy” Combs made his fashion debut with the Sean John men’s collection for the spring 1999 season in 1998. It was nominated for the fashion industry’s version of the Oscars Council of Fashion Designers of America  (CFDA) Award for Menswear Designer of the Year in 2000, and Combs won in 2004. Since 2008, Combs has appeared in a series of Macy’s commercials with a number of stars that also sell products there, including Martha Stewart, Jessica Simpson, Usher, Donald Trump and more. The Sean John billboard is currently the largest print ad in New York City’s Times Square. As of next year, if you’re considering purchasing Sean John elsewhere, keep in mind it may not be the real thing. And counterfeit is not sexy.