The following is an excerpt from Sarah Jakes’ (Bishop T.D. Jakes youngest daughter) new inspirational memoir Lost & Found: Finding Hope In the Detours Of Life in which she opens up about becoming pregnant at fourteen, being the topic of gossip and hearsay, a failed marriage and her spiritual healing journey.

It’s easy to blame my heartbreak on him, but no one was more responsible than I was. I had been disappointed when I got pregnant at thirteen and gave birth at fourteen. I was upset when I dropped out of college. I tried so long not to be a statistic, but the expectations were too much and I quit. I didn’t want to be a disappointment to myself again, a quitter, someone who couldn’t keep fighting for her marriage. I didn’t want to risk failing again, so I had stayed with someone who expected nothing from me while I expected everything from him. I thought that by exceeding his nonexistent expectations I would inspire him to attempt to meet at least some of mine.

It was as if I was intent on speaking Italian when all he could understand was Spanish. My language never reached his ears because he didn’t want to learn the vocabulary required to understand the message of my love. I had foolishly assumed that with love came loyalty and respect. But those three are so distinct that it’s a disservice to bundle them all together within four little letters. I had never accepted love that didn’t come with loyalty. I couldn’t understand it and this upset me. I was mad at him for not speaking the language of love that he’d never bothered to learn. I hadn’t experienced enough to understand that sometimes too much is lost in translation. Both people have to want to communicate to create their conversation.

Both people have to want to communicate to create their conversation.

Perhaps this explains why love will always be one of the hardest words to define. Its meaning is so relative. My grandmother once told my father, “When falling in love, never go first,” warning that the one who falls first assumes all the risk. However, based on my experience, I would update her advice to say, “When falling in love, never go alone.” I had fallen so far from where I started. I just didn’t realize how low it was going to take me. I found myself under the dirt where the seeds of our love should’ve made the world more fruitful. Instead, my relationship with Robert pulled me to the earth’s core, down to the molten core where nothing survives without being charred. We had burned through years of our lives with passion, anger, and pain. I had wanted my marriage to be my safe place, my refuge. Yet with each incident of another woman, lie, and betrayal it became the inferno from which I could never escape. The girl in me who liked to chew ice had melted away, leaving nothing but a puddle of who I once was.

Finally, I was ready to transform my pain into wisdom, my tears into fuel for change. I had learned so much the hard way. Allow me to tell you what I said to myself during those days when I was trying to find the strength to get on my feet and walk out the door. You want to believe that love conquers all. It’s what they tell us. That if we love someone enough, nothing else will matter. The truth is love isn’t enough if it makes you worse. Love is far too sweet to have left you so bitter.

Love isn’t enough if it makes you worse. Love is far too sweet to have left you so bitter.

You’re strong enough to want more. You’re better than this moment. And believe it or not, even if, like me, you wasted into nothing, know that your mess is a beautiful blank canvas for Him.

You must be willing to admit that you have lost your way and can’t escape the pain. Open your mouth and ask for help. Be willing to admit that you were wrong. That you’re broken and you’re afraid of doing it on your own. Each time you give your fear a voice, it can no longer whisper into your destiny. The Enemy is counting on us to give in. He wants us to lose our way.
Don’t let him win.

So no matter what rumors they may tell, or worse, what truth may spread, it’s not worth your being this person you don’t recognize. It’s not worth missing out on your purpose. The more you can be distracted by things and people, the less time you have to search and find what God has placed inside of you.

The more you can be distracted by things and people, the less time you have to search and find what God has placed inside of you. 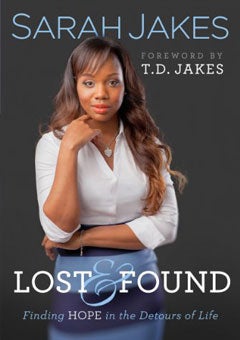 On April 1st, join us for a powerful Twitter chat with Jakes on love lessons learned and how to move on from 1:30-2:30pm EST. Follow @ESSENCELoveCrew and #SheTime to join the discussion.

Sarah Jakes’ inspirational memoir Lost & Found: Finding Hope In the Detours Of Life will be released on April 1, 2014. To pre-order a copy, visit her website.