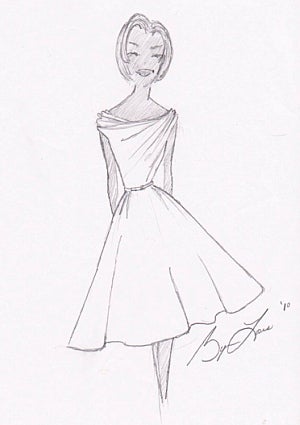 Guessing which designer Michelle Obama is wearing has become a fun fashion hobby. Last week, the web was buzzing with word that the sophisticated frock she wore to the tribute to the Beatles’ Paul McCartney was a Byron Lars original. You may recall, Lars told us not too long ago that designing for the First Lady was a dream of his. Unfortunately, those of us not in attendance at the Kennedy Center will have to wait until the event airs on PBS on June 28th to get a good look at Lars’ dress. In fact, even Lars is counting down the days. Just like the rest of us, the only image he’s seen so far is the brief YouTube video of the First Lady’s entrance. As we wait on the release of the photos, we got a chance to chat with Lars about the design of the dress — check out the sketch — and how he got this now coveted number in the First Lady’s hands. ESSENCE.com: Who reached out to you about Michelle Obama wanting to wear one of your dresses? Or did she purchase the dress on her own? BYRON LARS: A very gifted designer and friend, Duro Olowu, introduced me to Ikram (owner of high-end Chicago boutique, Ikram) who would be meeting with the First Lady about ten days after our initial conversation. Ikram has provided Mrs. O with several great things to wear even before she became a resident of the White House. They’ve continued to ever since. I was, of course, thrilled at the prospect of being included among the many talented designers that have already had the honor of dressing Mrs. O, so I got busy and made a few special things for her. One of the pieces included among those special things was the dress that she wore to the concert in tribute to Sir Paul McCartney at the Kennedy Center. ESSENCE.com: Is the dress Michelle Obama wore from your recent collection? LARS: Although the upper portion of Mrs. O’s dress is like that of a dress that is currently in stores, the skirt was completely different. ESSENCE.com: The public has only gotten a quick glance at the dress on video footage of the evening. Can you describe the details of the dress and the inspiration behind the design? Was the embellished belt part of your design? LARS: The blush silk charmeuse swirl neck dress with petty coat skirt took its cues from an MGM aesthetic. The time when MGM conjured images of the stuff of which dreams are made. The belt that she wore was not mine but, was nonetheless perfect for the dress. ESSENCE.com: Love the way she uses accessories to make every look her own. Did you know if she’d be wearing your dress at the Kennedy Center? LARS: I didn’t have any advance notice of her wearing my dress and found out with everyone else. However, I have to say that it was a very nice surprise. ESSENCE.com: It hasn’t been that long since she debuted the dress, but you must be getting lots of calls already? LARS: We have gotten lots of calls… it’s been great. The interest in the First Lady’s exact dress has been so overwhelming by the public. We are, of course, offering it now in the showroom. This means it will be available in stores in October. ESSENCE.com: Any chance we will see her in Byron Lars in the future? LARS: I certainly hope to see the First Lady in Byron Lars in the future! One thing’s for sure, we’ll keep making great clothes and Mrs. O will, I’m sure, keep wearing them. I hope our fashion paths will cross again in the not too distant future.