Ahmad Khan Rahami, the 28-year-old suspect in a series of bombings in New York and New Jersey over the weekend, was taken into police custody Monday afternoon after a shootout in Linden.

Police located Rahami after the owner of a bar in Linden found him sleeping in the doorway of his business.

When officers responded, Rahami pulled out a handgun and opened fire, striking an officer in the chest. A foot chase ensued, during which Rahami shot at a police car, causing a bullet to graze another office in the face.

The chase ended when Rahami was shot multiple times. He was taken to a hospital for surgery. Officers Angel Padilla and Peter Hammer were taken to the hospital for treatment of non-life threatening injuries.

While authorities are confident Rahami is linked to the bombs in Seaside Park and Chelsea, evidence does not prove that he acted alone.

A series of blasts and the discovery of undetonated explosive devices over the weekend in New York City and New Jersey are being investigated as the work of a possible terror cell, CNN reports.

The bombings – one of which occurred early Saturday when a pipe bomb detonated in a garbage can right before a Marine Corps charity run in Seaside Park, New Jersey and the other that night in New York’s Chelsea neighborhood – have led investigators to believe 28-year-old Ahmad Khan Rahami, an Elizabeth, New Jersey resident, may be involved.

Twenty-nine people were injured in the Chelsea blast. All injuries are said to be non-life threatening.

New York police identified Rahami as a suspect following the discovery of a backpack containing multiple bombs in Elizabeth late Sunday night. And though police have a suspect in mind, it’s unclear who is responsible for the bombings and if they are connected to a stabbing in Minnesota that left nine injured.

Here’s what we know about the series of attacks across the U.S.:

Two Bombs Went Off In New York and New Jersey:

On Saturday morning, a pipe bomb exploded near the starting line of a charity race in Seaside Park, New Jersey. No one was injured in the blast.

Hours later, a bomb was detonated in NYC’s Chelsea neighborhood around 8:30 p.m. That explosion injured 29 people, all of whom were treated and released from the hospital.

Multiple Explosive Devices Were Discovered Across The NYC/NJ Area:

While investigating the explosion in Chelsea, investigators located a pressure cooker bomb a few blocks away. The bomb was outfitted in duct tape and what appeared to be a cell phone, CNN reports. 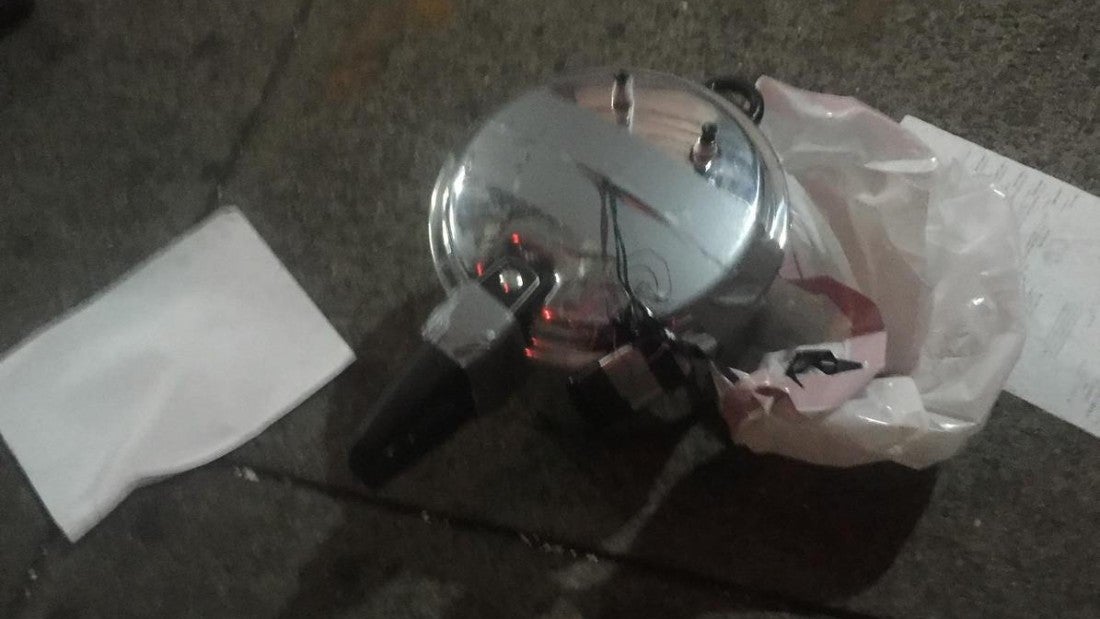 On Sunday night, a backpack containing five devices was found near a train station in Elizabeth New Jersey. When officers sent in a robot to investigate the bag, one of the devices exploded.

According to CNN, the four undetonated devices will be transferred to an FBI laboratory for investigation.

The FBI Has Identified At Least One Suspect:

While it is unknown in the explosions, while similar, are connected, authorities have released a photograph of 28-year-old Ahmad Khan Rahami.

Authorities are seeking to question Rahami about both bombings in Chelsea and Seaside Park. While little is known about Rahami, officials say the New Jersey resident is of Afghan descent. Police say they believe he is the man seen in surveillance videos “rolling a duffel bag near the scene of the bombing” in Chelsea, CNN notes.

He may be armed and dangerous, according to New York City Mayor Bill de Blasio.

The FBI Has Detained Five Others In Connection With The Chelsea Bombing:

On Sunday night, the FBI took five people into custody as they attempted to cross the Verrazano Bridge from Staten Island to Brooklyn.

From the NY Daily News:

The weekend trail of terror continued along the Belt Parkway where federal agents nabbed several people of interest with a weapons stash inside an SUV, according to law enforcement sources.

The five taken into custody had come over the Verrazano Bridge from Staten Island. Investigators were trying to determine if the occupants of the SUV were about to drive out of town or take a plane, sources said.

While authorities have not linked a series of bombings and attempted bombings in the East to a stabbing attack in a Minnesota Mall Saturday night, they are not ruling out the possibility.

The attacker – identified as 22-year-old Dahir A. Adan – was said to be a “solider of the Islamic State,” by the ISIS-linked news agency Amaq, CNN reports.  Nine people were stabbed at the mall before a police officer was able to shot and kill Adan.

He wore a private security company uniform, made a reference to Allah and asked at least one person if they were Muslim before he attacked, according to police and witnesses. The stabbings at Crossroads Mall in St. Cloud happened in several stores, and off-duty police officer Jason Falconer has been hailed a “hero” after shooting dead the attacker who lunged at him with a knife.

Police are continuing to investigate the series of attacks across the nation.